Who owns the river? 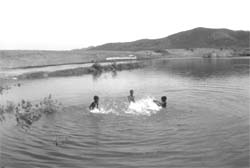 for the first time in many years, the village of Lava-ka-Baas in Alwar district, Rajasthan, got water just a month ago. With the first showers of monsoon, its 500-odd residents saw the traditional water harvesting structure that they had built in their village fill up with water. And joyfully they started to prepare for cultivation in this drought-prone district.