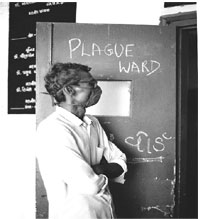 a group of French researchers has come across a bubonic plague bacterium that is resistant to multiple antibiotics. The bacterium, called Yersenia pestis (y pestis), was isolated from a 16-year-old boy from Madagascar in southern Africa. It has developed resistance to all first-line antibiotics and principal alternate drugs used to prevent the infection (New England Journal of Medicine , Vol 337, No 10).

Until recently, researchers had discovered only those strains which are naturally resistant to tetracycline. But the bubonic plague bacterium has shown resistance to ampicillin, chloramphenicol, kanamycin, streptomycin, spectinomycin, sulphonamides, tetracycline and minocycline.

A team led by Elisabeth Carniel of the World Health Organisation's Collaborating Centre for Yersenia at the Pasteur Institute, Paris, reports that the multi-drug resistant plasmid is highly transferable in vitro (in the laboratory) to other strains of y pestis . They say that this type of replicon is likely to be transferred among strains of y pestis in their natural environment. Thus the resistance may spread locally in this specie. Replicon is a nucleic acid molecule that replicates as a unit, beginning at a specific site within it.

The researchers have expressed concern over the bacterium's ability to acquire drug resistance under natural conditions. The infection can be effectively treated with the help of antibiotics. However, only limited drugs are available for this purpose.

Plague re-emerges when animals carrying plague infections lose their natural habitat due to human activity and in their search for food, come in contact with humans. Human plague is considered as one of the re-emerging infectious diseases. Between 1980-94, nearly 18,739 cases of plague were reported to the who by 24 countries from Africa, the Americas and Asia. Recent outbreaks of human plague have been reported in east African countries, Madagascar, Peru and India.

In case of the bubonic variety, the infection is transmitted when an infected flea bites a human. But in pneumonic plague, the infection is passed from one person to another through microscopic droplets made airborne by coughing. David Dennis and James Hughes at the Centers for Disease Control and Prevention, Atlanta, usa , say that such emerging infectious diseases and anti-microbial resistance in one area can even translate into a worldwide problem.

The who has set up a Division of Emerging and Communicable Disease Surveillance and Control to strengthen the national and international surveillance efforts of infectious diseases. Recently, health officials in Delhi met to discuss strategies so that the next episode of plague could be strongly dealt with. The meeting was held amidst reports that rats are dying in some districts of Karnataka that could trigger off a plague outbreak. A team of health officials from the National Institute of Communicable Diseases, Delhi, has already been sent to Karnataka to assess the situation.