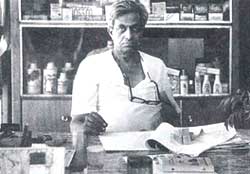 THE MEDICINAL and pesticidal properties of neem are beginning to excite interest the world over. In India, medical treatises going back thousands of years indicate that the tree is a rich source of medicinal compounds.

The Neem Mission in Pune, set up by the promoter of neem, C M Ketkar, has been trying hard to incourage an interest in the tree and supplies literature, coloured slides, video films and products based on neem.

An interesting publication, Neem Newsletter, is being brought out by B S Parmar and R P Singh of the division of agricultural chemicals, of the Indian Agricultural Research Institute (IARI). Distributed free to those engaged in neem research and its utilisation, the newsletter provides a regular update on research papers on agricultural uses of neem. It is now in its ninth volume.

In terms of present work, the IARI has been involved in neem research ever since the 1960s. IARI director S K Sinha and his colleagues are compiling all the neem reserach conducted at the institute.

Scientists at the Defence Institute of Physiology and Allied Sciences (DIPAS) and the National Institute of Immunology in New Delhi have been trying to use neem products for birth control purposes because of its strong spermicidal action.

The fourth World Neem Conference is scheduled to be held in Bangalore from February 24 to 28, 1993. The conference is being co-sponsored by the Indian Society of Tobacco Science and the Indian Council of Agricultural Research in collaboration with ITC Ltd, Calcutta.

The National Research Council in the US recently published an overview of neem research across the world in a book, entitled Neem: A Tree for Solving Global Problems.

The Canadian Broadcasting Corp has produced a film on neem entitled, Neem, A Natural Insecticide. The film has been produced by Vishnu Mathur for David Suzuki's serial, The Nature of Things. Filmed in India, it shows how neem sprays can be made from neem seeds through a simple method. It also shows the many uses of this wonder tree. The film describes neem as a tree of paradise and points out that at present only 20 per cent of available neem trees are being made use of in India. C M Ketkar of the Neem Mission and G M Jotwani of IARI were the main sources of information for the film.

Another film on neem made by the German Agency for Technical Cooperation (GTZ), shows the extraction of oil from neem seeds in Niger, West Africa. It is basically meant for farmers in the region where neem trees grow in the vicinity of the farms. Both films are available with Ketkar.