Yet, life s in tatters 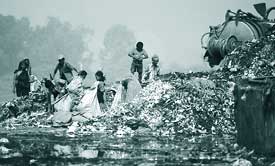 Ragpickers are solely responsible for manually separating non-biodegradable wastes from garbage bins in cities. "They play a vital role in the economy of solid waste recycling process. They feed the need of intermediary buyers, who, in turn, meet the demand of factories using recyclable solid waste as raw materials,' points out Nitai Kundu of the Institute of Wetland Management and Ecological Design, Kolkata. But for a group with such a vital function in society, their lives are literally in tatters.

Most ragpickers are migrants from Bangladesh and states like Bihar, Uttar Pradesh and Madhya Pradesh. Ragpicking is often their only source of livelihood. Although no data on their population or other such details is available, an estimate by Butterflies, a non-governmental organisation (ngo), says one lakh street children out of a total of three-four lakhs engage in this work.