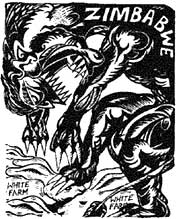 The uk recently launched a polemic attack against Zimbabwe over its plans to seize all "white' farms, saying that London had fulfilled its obligations as a former colonial power and was "dismayed' that previous aid for land reforms had not been used productively.

Tony Lloyd, minister of state at the foreign and Commonwealth office, told a news conference in Harare that the uk would not support president Mugabe's planned takeover of some 1,500 farms. He said that the plan did not conform to the uk 's belief that land reforms should alleviate poverty among the landless and should be transparent enough to avoid allegations of government corruption. Lloyd's comments came after a campaign by president Mugabe accusing the British government of "stealing' Zimbabwe's land over a century ago. He went on to describe the current "white' farmers as "children of Britain', and demanded that London compensate them for the land he takes.

Lloyd, however, pointed out that "Britain has no direct obligation in these areas. What it does as a good neighbour, is provide aid and assistance.' Dismissing collective British colonial guilt, the British minister said, "My generation of people in Britain weren't those who benefited from colonialism.'