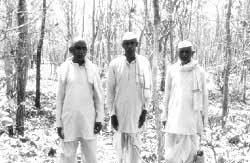 "The forest was dense till the 1960s," recalls Suryabhan Khorbade of Sayagata village in Maharashtra's Chandrapur district. During the British rule, people were allowed to enter the forests at their own will. But after Independence, when the forest department stepped in, there was a ban on access to the forests. "Soon, illegal logging reduced the once-lush forests to a lone banyan tree near the village temple," says Lala Ram, a 60-year-old farmer.

Villagers lost their source of livelihood. There were no tendu leaves, gum and mohua to sell in the market. Most of them were forced to cultivate their lands or work as bonded labourers elsewhere. But agriculture did not reap any benefits as the land was unproductive.

The problems were plenty but solutions only one - to work together in regenerating the land. This was not very easy. The village population comprised eight castes and nobody was ready to sit together and chalk out an action plan. To end the stalemate, in 1966, Khorbade along with his friends staged a drama. "The important aspect of the drama was that all of them came together to watch it," he says. He continued staging plays to develop cordial relations.

Finally, in 1973, the villagers formed an organisation called Krushak Charcha Mandal under the leadership of Khorbade. At that time, a government official gifted them a one-band radio. The Nagpur station, which the radio was able to receive, used to broadcast a programme on agriculture twice a week, which the farmers used to religiously follow. After the programme, they discussed various issues that the particular episode highlighted. When in doubt, they would write letters to the radio station. "The whole process helped in bringing the people together," says Lala Ram.

Soon, they realised that the root of their problem was degradation of the forests. The village Gram Sabha election was held in 1979 and it was decided that an attempt to regenerate the forests had to be made. But there was one hitch - who's forests was it, the government's or the people? Despite the dilemma, the villagers formed a committee headed by Khorbade.

They fenced the forests. But did not plant any new trees. The stress was on regenerating natural root-stock. Groups of 10 people guarded the degraded forests day and night, says Khorbade. By 1982, the forest started showing signs of recovery. However, the jubilant villagers were in for a surprise. The forest department was back and officials even prevented them from collecting fodder. "The people put aside their personal egos and protested against the officials," says Vital Rao, a forest guard.

The battle between the forest department and the people is far from over. But the people decidedly surpassed them and launched a joint forest management (jfm) programme in 1993 and charted rules for protection of the forests. Villagers in need of wood have to apply to the village forest committee. If anyone is caught felling without prior permission, he/she is asked to pay a fine of Rs 1,000 or is punished suitably.

The result of the villagers' efforts is showing. The green cover is back. The groundwater table has also risen. "Now water is available throughout the year," says Kusum, a resident of the village. Also, the agricultural yield has almost doubled, says Lala Ram. Says Khorbade, "We have realised our power. And there is a feeling of kinship among us. This is our greatest achievement."