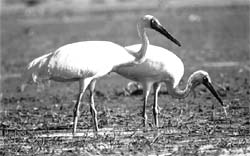 The Keoladeo Ghana National Park in Bharatpur, Rajasthan is known as much for controversies as for the famous Siberian Crane, which migrates to the park every winter. Succumbing to pressures from environmentalists and scientists of the Bombay Natural History Society (BNHS), including the well-known ornithologist Salim Ali, the region was declared a national park in August 1981. A ban on grazing was imposed from October 1, 1982.

Many problems followed. A conflict ensued between the forest department and the graziers, leading to a bloody protest that claimed seven lives. The livelihoods of many people were jeopardised. This resulted in huge economic losses to the poor. It also led to an ecological disturbance.

Absence of grazing by buffaloes led to the proliferation of the weed Paspalum distichum , which made it difficult for the cranes to locate and extricate underground tubers that they feed on.This was pointed out in India's Wetlands, Mangroves and Coral Reefs, a study conducted by the World Wide Fund for Nature (India) on behalf of the Union ministry of environment and forests. "As a result, a four-fold increase in the time taken for each feeding by these birds has been observed," the study added.

The number of cranes decreased from 200 in the mid-1960s to a mere four in the early 1990s, the study points out. Not only were the scientists wrong in banning grazing but that they were out of touch with research in other parts of the world. "It was already apparent in the mid-1980s that it was an awful mistake to ban grazing. Instead, a regulated grazing scheme should have been organised," says Hans Meltofte of the Danish Polar Centre in Copenhagen, Denmark.

"The final report of the detailed ecological study of the region by the BNHS, which came out in 1991, recommended reintroduction of grazing," says C L Trisal, coordinator of the environmental organisation Wetlands International South Asia. Ultimately, Krishan Kumar, secretary-general of the Keoladeo Ghana Natural History Society, also recommended the same. "Scientific decision was delayed in this matter," says V B Mathur, wildlife scientist at the Wildlife Institute of India, Dehradun. The cost was borne by the local graziers and the ecology, not foresters or scientists who were responsible for the bungle.

Even now, grazing is banned, as confirmed by Shruti Sharma, director of the park. First of all, under the Wildlife (Protection) Act, national parks should be free from any intervention. "So, until the act is amended, grazing will not be allowed," Sharma points out. However, now that the officials concerned realise the ecological cost of banning grazing, they have decided to allow villagers to at least harvest the grass, which is used as fodder.