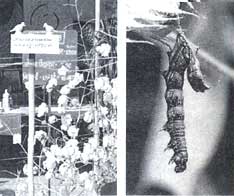 WITH the limitations of synthetic insecticides and their adverse effects on the environment, scientists are trying to tackle crop pests such as bollworms by integrated pest management (IPM).

"IPM is the consolidation of evaluated pest management techniques into a unified programme to manage pest populations to minimise economic loss and avoid the adverse side-effects on the environment," says P D Sharma, senior entomologist of Haryana Agricultural University in Hisar. Under IPM, pests would be subject to birds and insects that feed on them, disease-causing bacteria and viruses, plants that trap them and even synthetic pesticides and plant derivatives.

Says Sharma, "Eradicating bollworms is out of the question -- they can now only be controlled." Sharma has developed an IPM model for the bollworm, but admits it has to be improved to suit the geo-climatic demands of the region.

Meanwhile, Joginder Singh, a senior entomologist at PAU, and Manjit Singh Dhindsa, PAU's ornithologist, have identified 14 birds, including mynahs and sparrows, that prey on the bollworm. The scientists are now designing a model cotton farm with ideal locations for trees, tall fodder and plants like pearl millet for birds to catch worms.

Scientists recommend "habitat management" -- growing crops like bajra, soya bean, maize and chillies, which are abhorred by bollworms. They also suggest intercropping cotton with onion, black gram, green gram and cowpea, on which the pest prefers to lay eggs. The eggs can be destroyed by breaking off the leaves on which they were laid.

The indiscriminate use of insecticides is also killing the natural enemies of the bollworm. Several insects like Trichogramma chilonis, Dactylopius coccuus, and Chrysoperla carnea, are enemies of Helicoverpa, which scientists say should be encouraged. The possibility of cultivating plants like the sunflower which host these natural enemies is also being studied.

Similarly, scientists are experimenting on how to introduce into cotton fields viruses that cause a fatal bollworm disease. Neither the bio-pesticide Bacillus thuringiensis nor neem extracts has proved successful by itself in containing the bollworm and they are now being tried as components of larger IPM endeavours.

Scientists believe that synthetic analogues of pheromones -- chemicals secreted by female moths to attract males -- can lure male moths which can then be trapped. This method is being used in Karnataka, where the government pays farmers 10 paise for each moth trapped.