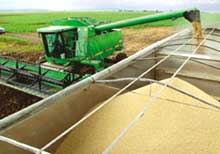 Following the us government's announcement that an illegal and untested genetically modified strain had contaminated its conventional long-grain rice, the European Commission has stopped its import. While Japan has suspended imports, the 25-nation European Union has placed strict limits saying the grain will not be allowed unless it is certified as free from the unauthorised strain. Several us rice customers are also reportedly reviewing their planned purchases.

According to the us Department of Agriculture, the contamination was first traced in rice storage bins in Arkansas and Missouri. The source is a trial gm strain called llrice 601, engineered by the German-based Bayer CropScience, but the rice was not approved for human consumption due to health risks. Since the announcement of contamination, us rice prices have dropped sharply. Meanwhile, us rice farmers have sued Bayer seeking damages to compensate for falling rice prices.