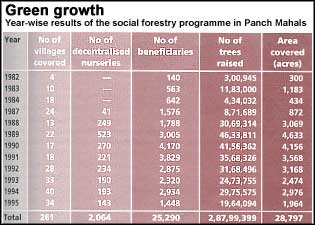 THE social forestry programme (SFP) initiated by N M Sadguru Water and Development Foundation (NMSWDF), an NGO working in Panch Mahals district in Gujarat, has empowered a large number of tribal women in the district by involving them in the management of nurseries and plantations. The programme, which began in the early 1980s, has supplemented the income of these women over the years and improved their economic and social status.

Under the SFP, the beneficiaries are paid wages for planting trees, digging pits and working the soil. Farmers plant trees on private wastelands, embankments and field strips for subsistence and economic gain. The income from nurseries has increased the debt repayment capacity of the workers. The women working in nurseries have their own bank accounts. As a result, their purchasing and decision-making powers have increased. For example, Kanta ben of village Chosala could decide to approach the NMSWDF to guide her for loans from the tribal sub-plan for purchasing a five horsepower machine. Rupli ben of village Therka paid money for deepening her family's well.

The SFP has also reduced the rate of migration among the tribals. During the study undertaken by the author, it was found that people were reluctant to migrate even though they had opportunities of earning better income. Most of the respondents said that with self-employment opportunities already available in their villages, they were more secure and able to take care of their homes, livestock and farms. The women no longer have to face problems caused during migration like exploitation and physical abuse.

The nurseries have provided the tribal women with security against their loans. They can avail of loans from nurseries against tentative cash payments. For instance, Khatudiben Nursinghbhai from village Timbi could purchase fertilisers worth Rs 2,000 from a shop by ensuring that she would repay the amount after getting her wages from the nursery. All respondents surveyed by the author expressed satisfaction about the financial benefits from the nurseries. Six respondents earned between Rs 6,000-10,000, while 14 earned over Rs 10,000 in six months. The nursery workers are provided with additional financial incentives which mainly depend upon the survival rate of saplings in the nursery.
Additional gains The earnings are also used for purchasing assets. Of the villagers surveyed, 14 had purchased jewellery, 10 had availed of bio-gas facility while another 10 had purchased bullocks. Consequently, their standard of living and status in the community has risen. The SFP has helped the beneficiaries avail medical facilities. Kanta ben of village Chosala can save the life of her four-year-old daughter who was seriously ill. It has also increased the scope for higher education for their children. For example, Vash ben of village Charade could send her son for higher studies which otherwise would not have been possible.

In addition to financial benefits earned by nursery workers, there are also some indirect benefits. For example, almost all the ED respondents undertook tree plantation in their own lands where vegetation was almost nil. The villagers now own trees worth Rs 50,000 to Rs 1.5 lakh. Thus, in areas like Panch Mahals, where small-sized land ownership is the only asset of the tribals, possessing a large number of trees is a big blessing. Along with tree plantation, the beneficiaries are also mobilised to undertake other income-raising activities like vadi cultivation (a farm where vegetables, flowers and fruit trees are grown) and raising crops. Nine out of the total respondents interviewed said that they cultivated vadi and the net income earned from these vadi ranged between Rs 5,000 and Rs 7,000 per annurn.

The economic benefits realised by villagers of Chitrodia and Thakra have motivated them to grow trees which can be sold at a high price. Continued technical and social inputs by NMSWDF has helped, increase entrepreneurship among the tribals. There is a rising interest among the respondents to set up their own nurseries even in the absence Of NGOs and they are confident about marketing the plants themselves.

The SFP survey
The author selected 10 villages - five in Dahod taluk'(province), four in Jhalod and one in Limkheda taluk to see the results of the nursery raising programme which is being implemented under the SFP. From each village, two respondents who had participated in the nursery programme for at least two years were selected. The study found that the villagers, mainly the women, closely guarded their nursery plots. It was noticed that before the period of plantation, incidents of theft increased greatly,hence the need for guarding the plots.

The SFP is mainly funded by the District Rural Development Agency and partially by the tribal sub-plan. In this programme, tree plantation is integrated with other crops and landuse. This leads, first, to productive utilisation of lands and, second, it works as an avenue for augmenting the income of farmers. Till 1995, about 261 villages had been covered under SFP and 2,064 decentralised nurseries were formed. Around 2.88 crore saplings were distributed to 25,290 households covering 11,663 hectares of land.

The training programmes organised by the NGo have become increasingly popular among the tribal women. They have helped the women develop their skills, mobility and status in their families and villages. Now even men come to seek the NGO'S their advice regarding matters like plantation and pit digging. Although most of them had to face a lot of opposition from their families in the initial years, the benefits derived from their work was later acknowledged by their families.