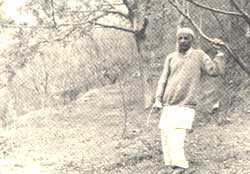 THE Banihal Valley in Jammu's Pirp.anjal range, which separates the Jammu region from the Kashmir Valley, appears like an oasis amid barren hills. This area, 2,000 m above sea level, which was until recently totally denuded, is now green with fruit trees and vegetable patches.

The transformation is due to the efforts of 55-year-old Sonaullah Banihali, a politician turned environmentalist. Banihali realised that tilling land for paddy and wheat in the hills leads to soil erosion and he reasoned that only fruit trees and vegetables should be grown here.

In order to demonstrate this, Banihali started with his own 0.4 ha terraced plot, which lies a short distance from Banihal bazaar. It had been lying barren for years because of lack of water. But Banihali overcame the problem rather ingeniously: he employed a PVC hose pipe measuring one km in length to bring water to his fields from the Chanjulu nullah, where he had built a small check dam in 1971. The hose pipe cost him just Rs 2,800! Making.barren hillsides bloom' The surplus water he utilised for growing vegetable crops and raising fruit nurseries between the fruit trees.

There was a method in what many saw as his madness: since fruit trees take almost 15 years to yield returns, an alternative income could be earned through cultivating vegetables like knolkhol, cucumbers, french beans, tomatoes, cabbages and peas. In fact, Banihali was able to earn Rs 30,000 annually from hjs patch through these carefully worked out strategies.

Along with introducing innovations in land use, Banihali started promoting community-level afforestation projects in the area. According to local accounts, the region was rich in forests until about 70 years ago. But illicit felling of trees in the region took its toll.

In 1957 and 1959, the Chanjulu nuJlah flooded over, causing many deaths and loss of property in the Banihal Valley, Sonaullah Banihali's own house and two shops were washed away. The floods were a-turning point. Says he, "We realised that the answer to the floods lay in creating plantations in the area. "

Banihali became a member of the Jammu & Kashmir state legislative council in the 1970s. As an MLC, he was flooded with requests for jobs from rural youth. "I realised that the government could not provide endless jobs and that the rural economy must be re-oriented to provide gainful employment."

He evolved a 35-point programme of action calling for the planting of fruit and other utility trees, shifting to vegetable crops and adoption of occupations like dairy and poultry farming and pisciculture. Getting people to accept these ideas was difficult at first. There was a great deal of scepticism over whether planting trees would bring any prosperity to the local, community. Many made fun of Banihali, calling him "Kikar Sonaullah" because he emphasised the importance of kikar (Acacia nilotica) plantations. "What would we eat next season if we do not plant paddy and maize?" they asked.

"So rampant was the cynicism among the people over adopting Banihali's methods that I planted walnut saplings on my barren land at 4 am, when it was still dark and people couldn't see me," recalls 80-year-old Moulvi Ghulam Qadir of Holana, whom 4 Sonaullah Banihali calls his first comrade. But slowly people realised that what Banihali was arguing made economic sense. The story of Hakhan Daur (burnt mountain), which is today rechristened Sukhan Daur (mountain of pleasure), best illustrates the success of the Banihali approach. He persuaded the people of the four villages adjoining this barren mountain slope, which lay east of Banihal and measured about 200 hectares, to stop grazing their cattle in the area. The soil conservation wing of the state government's forestry department fenced off the land and planted one lakh saplings. In the very first year the people were allowed to cut it for fodder.

But for all his popularity, Sonaullah Banihali has not been able to escape local political tensions. Militant pressure has forced him to keep a low profile especially After his house was burnt in a mysterious fire.

But even if ill-health and power politics have taken a toll of Sonaullah Banihali, the model he evolved will long inspire others. His mission in life is to build a heaven on earth.

As he puts it, "Those planting trees will be blessed with jannat (heaven) by Allah."