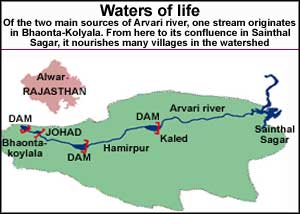 A tale of two villages
There are about 600,000 villages in India. And perhaps as many kinds of environmental problems they face. It is easy to accept defeat. But Bhaonta-Kolyala did not


it's an unusual ritual the villages of Bhaonta-Kolyala follow. Every year, they pour water into a johad - a crescent-shaped earthen check-dam - on Deepawali. But history has it that some 1,000 years ago, they were killed en masse by neighbouring villagers while observing the ritual. That was when the twin villages got together and came to be known as one. And ever since, they don't celebrate Deepawali. But they continue filling johad s with water.

Their visit to a johad s is not limited to one day in a year. Every new-born is taken to a johad "to be blessed by the deity residing in the johad ". A newly-wed couple does the same. And on a no-moon day, villagers engage themselves in community work like building a temple or starting work on a new johad.

Despite such a strong tradition of water harvesting, in the years that followed the villagers started neglecting johad s, which were buried with pebbles. Besides, during the late 1970s and early 1980s, the villagers suffered four spells of drought. The 25 wells in the village had no trace of water for most of the year.

"There was nothing to sustain ourselves," recalls villager Arjan Gujjar, who was to actively participate in water harvesting later. Most of the men migrated to cities, while the rest accepted their lives as "ill-fate", says Kanheya Lal, an active village leader. "Two or three decades ago, the hills were covered with dense forests. It helped in protecting the soil and water aquifers and provided favourable conditions for the regeneration of trees and pasture. The hills were also home to a number of wild animals," points out S S Dhabariya, former head of the remote sensing division of the Birla Science and Technology Centre in Jaipur. "But, over a period of six decades, all that vanished," he adds. Worse, rainfall here is quite low (600 mm, of which 500 mm falls during the monsoon). With the forests gone, the sloping landscape of the hills failed to retain any water during the monsoon.


Johads: the rediscovery The year was 1986. Villagers of Bhaonta-Kolyala noticed a remarkable development in Gopalpura, a village 20 kilometres (km) away. Gopalpura had water in its wells round the year. The reason - villagers had revived johad s with the help of Tarun Bharat Sangh (tbs ), a non-governmental organisation ngo .

The same year, tbs ' annual pani yatra (march for water) from Gopalpura passed through Bhaonta-Kolyala. Led by farmers Sundra Baba and Dhannua Baba, the beleaguered villagers finally approached Rajendra Singh, secretary general of tbs . He offered help but on one condition - that the villagers should be ready to take upon themselves the task of regeneration.

After organising themselves and the neighbouring villages, on March 6, 1987, the villagers started protecting forests and repairing old johad s. They mapped the natural drainage system and choose tentative sites to construct new johad s. "Our aim was to catch each and every drop of rain water that fell on the village," says Mangal Ram, a villager.

During the course of their search, they discovered an old johad , buried in silt, on the slope of the barren hills. In 1988, repair work on the johad started. When the monsoons arrived, the johad was filled with water. Overwhelmed by the results from a single johad , the villagers started building more such structures. Today, the village has a total of 15 water harvesting structures, including a 244 metres long, 7 metres tall concrete dam in the upper catchment of the Aravalli to stop water before it flows downstream, the construction for which was started in 1990.

The dam was a turning point. Even those who had migrated were called back to, as Dhannua says, 'heal the wounds of Mother Earth'. By 1995, a year after the completion of the dam, water level in the wells downstream rose by two to three feet. "The percolation of water from this dam is three feet an hour. Its impact is felt in villages 20 km downstream. All the wells are now filled with water," says Govind Ram, a villager. Today, all the agricultural land is under cultivation. Milk production has risen up to 10 times. Every rupee invested in a johad has increased the village's annual income by 2.5-3 times.

The most important lesson from Bhaonta-Kolyala is that when villages work with each other to regenerate the environment, there are unexpected blessings. Sometimes, they are as big as a river. In the case of Bhaonta-Kolyala, it was Arvari river. In 1990, when the villagers started constructing the big dam, no one knew that the site was the origin of the river. And by catching and percolating water, they were injecting life into the river (see map: Water of life).

The river's course was intact due to the monsoonal water run-off. In 1990, a small stream came out to vanish within weeks. That was part of the natural course of the Arvari. "It was then that the new generation of the village believed that there was indeed a river originating from the village. Till then, it was passed off as fiction," says Dhannua Baba.

A seasonal drain, Arvari grew like a child and started flowing for one extra month each progressive year. It became a perennial river in 1995.

Since 1986, 238 water harvesting structures have come up in the catchment areas of the river, including another huge dam in the second source of the river in Agar village. "Each and every monsoon stream has been dammed and virtually all the hills slopes have been afforested to stop run off and soil erosion," says Arjun Patel, a villager.

To ensure that the Arvari remains clean and healthy and also to solve internal disputes, the 70-odd villages in the Arvari basin have also formed the Arvari River Parliament.

Greening the desert
Building water harvesting structures was not enough for the villagers. To control soil erosion, they demarcated 12 square kilometre of the adjoining forest area for regeneration. And in 1995 they declared it as a public wildlife sanctuary, claimed to be the first of its kind in the country.

Symbolically, the sanctuary area starts from the dam built by the villagers. 'Bhaironath Public Wildlife Sanctuary', written on the dam, welcomes you to the sanctuary. With the regeneration of forests, wildlife has started migrating from the nearby Sariska Tiger Reserve forests. "Our forests are totally protected, nobody disturbs the wildlife. So the wildlife from the other forests are finding it safer here," says Dhannua Baba.

According to the local people, the sanctuary is at present home to three tigers, many bluebulls and deer. The tiger pug marks are proof of their presence in the sanctuary.
The gram sabha has also imposed a strict code of conduct - tree felling is not allowed though villagers are allowed to take branches for domestic purposes. Grazing is restricted to a specific patch of the forest. Recently, the villagers dug a pond on the periphery of the sanctuary for the benefit of the wild animals. Says Arjun Patel, "The village is getting back its beauty after generations. Now there are forests, water and wildlife." And for Dhannua Baba, the smell of tiger is good for crops. "It will ensure a good yield of crops," he says.

For the last three years, it has rained poorly in the region. But for the villagers involved in water management, there is enough water for drinking and irrigation. They have proved that the answers to seemingly unsurpassable environmental problems lie in social mobilisation and traditional wisdom. That economic well-being is a byproduct of ecological regeneration. And for a well-organised society, drought is a myth.