Hellfires in the hills 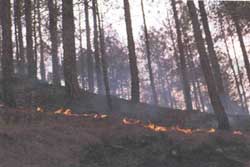 There are many reasons attributed to the groundfires that incinerated vast oak and pine forest tracts in Pauri Garhwal starting the 3rd week of May. The one among them that stands head and shoulders over the jagged, smouldering stumps of trees is human disenchantment with the laws of the land, drawn up, villagers mutter, by perverse bureaucrats without a clue about the multi-generation symbiotic relationship here between people and the forests. This year, villagers sought, and got, some revenge by maundering deliberately.

This year's forest fires reduced to cinders 61,000 ha of reserved forests and 91,000 ha of civil and panchayat forests in the Garhwal and Kumaon regions. By the 2nd week of June, as fires still raged in Pauri and Chamoli, reports of sporadic fires filtered up from the lower reaches of Himachal Pradesh.

So far, the fires either burnt themselves out of existence or were swatted out with green bushes. "Fire lines" -- buffer zones of land swept clean of inflammable dry leaves -- also helped. Both methods are labour-intensive and need local expert help. And this time, even expert advice went mum, as if by a mysteriously consensual political decision. Says A N Purohit, director of the G B Pant Institute of Himalayan Environment and Development (GBPIHED), "Till 10 years ago, they (the villagers) used to rush to control the fires. Nobody turns up now."

Says Kranti Bhatt, an environmental journalist from Gopeshwar, "The non-action is a protest against the forest policy, which is non-participatory in nature." The supporters of the demand for a separate Uttarakhand state yell louder than most. Gopal Datt Bhatt, a Garud-based Congress member of the zilla parishad, is clearly miffed about locals being dispossessed of the forests by the dour and tightfisted conservation acts imposed in the '80s: "Prior to these laws, we had complete rights over the forest. Now we can't touch the wood or animals or take out a pipe connection to draw water from a reserved forest. We get fined, imprisoned...Lots of the jungle burns here, but why should we save it?"

Says V S Rawat, a villager, "First we tried to control the fire by beating it with green bushes; then the pradhan called off the operation." The scenario was repeated, mostly in pine forests all over the Garhwal and Kumaon regions even as sparsely posted foresters turned to stone.

In Trisulla forest in Gopeshwar, a lone forest guard helplessly watched pine trees turn into candles. Some villagers then took matters into their own hands. Says Narayan Singh Negi, sarpanch of the Nauli Van Panchayat in Gopeshwar, "We have our own private guards to look after 457 ha of panchayat forests."

But the fires in the nearby reserved forests of Hapla and Bomnath went unchallenged, and proceeded to do incalculable damage by traversing 6 km to ravage patches of Trisulla forest. The villagers have it in for the reserved forests, which have been declared out of bounds even for simple produce collection. Only forests that come under the Van Panchayat Act are accessible to them, and the revenue they generate goes to the panchayat's till or is used for village development through the forest or revenue departments. As for the 3rd category of the area's forests, the civil forests, they fall inaccessibly under the jurisdiction of the revenue authorities.

Says Purohit, "The surface humus has been destroyed. As the surface loses its absorption capacity, the rainwater runoff will become greater, and thus poor recharging of groundwater sources." Forest springs will dry up. The soil will become poorer in nutrients as the level of organic carbon will increase due to the fire. "It may take nature more than a century to fully compensate the losses," Purohit adds.

The fire's ignition is still a mystery. Says Bhupendra Singh, district magistrate (DM) of Pauri, "The most likely culprit is the villagers' practice of burning off the thick layer of dry pine needles to aid grass growth for pasturine cattle" -- an oft-repeated theory. "Also," he added, "there could be accidental fires -- or fires left live by road repairing personnel."

Eighty per cent of the forest fires are in the chir pine forests (Pinus Roxburghii) out here, but showers and ground humidity rein them in. "Pine is actually an indicator of the level of soil degradation," says Kamlesh Kumar, divisional forest officer, Kedarnath. "The sad thing," says Purohit, "is that even evergreen oak forests" -- much in demand due to their fodder and fuel properties -- "were destroyed."

Another reason is the newfound prevalence of jhum cultivation, in which straw is burnt instead of being ploughed into the field as manure. In Kausani, fires raged side by side in the forest and the grain fields in the adjoining plains.

There are also widespread allegations of mischief, even by children -- and certainly timber smugglers committing forest arson to clandestinely procure healthy trees in the inevitable auction of burnt forests. But forest officials say that at best the smugglers could be "accidental beneficiaries" of a fire. Says Kamlesh Kumar, "When the Uttar Pradesh Forest Nigam disposes of the fallen trees, the contract is given out only for transport. The trees? Where do they go and to whom?). Smuggling is out as there is no ready wood market in the hills; and the burnt hill forests are often inaccessible."

The 1st effort at modern forest fire control came as a United Nations Development Programme (UNDP) and Food and Agriculture Organisation (FAO)-sponsored project in 1984. Two project centres were set up -- in Haldwani (UP) and Chaderpur (Maharashtra), with state-of-the-art firefighting equipment. The Haldwani centre had under its command a Lama helicopter, a 6-seater Piper Fenaca, 2 firetenders, 2 bulldozers, 2 dozen carriers, 7 pickup trucks with "slip-on" dousing equipment, 8 ambulances and a few jeeps; plus modern handheld equipment like powerblowers and waterjets. The Piper crashed in 1994 and the MEF uses the helicopter for "aerial surveys" by top officials and for "ground seeding".

This is nothing if not playing with fire.

Max Martin in Garhwal and Kumaon, with inputs from Madhumita Dutta in New Delhi