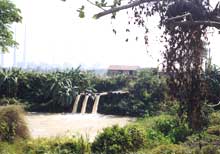 Scientists have detected an overload of radioactive compounds in the flyash in villages surrounding the 1,260 megawatt Kolaghat Thermal Power Station in West Bengal's Midnapur district. In addition, the tube well water in these villages contain very high levels of toxic elements.

While the flyash was found containing high levels of thorium and uranium compounds, 12 toxic elements, such as lead, silicon, manganese and arsenic, were spotted in the water. These can be responsible for the high incidence of blood and bone cancers and chromosomal aberrations in the area, researchers of the Indian Institute of Technology, Kharagpur, say in a paper published in the February 25, 2005, issue of the journal Current Science. The level of toxic elements is two to three times higher than the safe limits prescribed by the World Health Organization. The radioactive dose absorbed by humans is three to five times higher than the world average of 51 nano Gray.