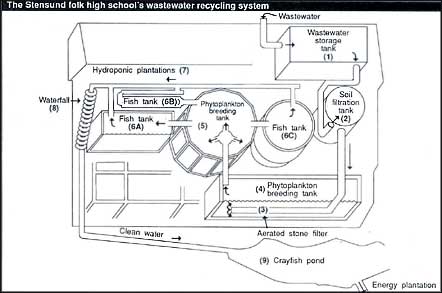 The figure shows the elements of a small-scale wastewater treatment system in use at Stensund high school in Sweden. First, a sedimentation tank stores the wastewater produced over two days (1). The water then is led to a soil filtration tank (2) with sulphuric bacteria under anaerobic (non-oxygen) conditions, which help to bind metals on soil particles in the form of metal sulphides. The wastewater then passes on to an aerated stone filter (3), where aerobic bacteria decompose and remove organic matter and toxic compounds. The water then goes to a container for breeding phytoplankton (4,5), which is used as food by micro-organisms that in turn become food for fish. This takes up a lot of the nutrients in the wastewater. The next part of the system is the nursery for different species of fish (6A, 6B, 6C). Various tropical plants like Eichornia crassipes, Pistia stratiotes, Hydrocleys nymphoides, Azolla filiculoides and Lemna minor are also grown in the fish tanks. From the tanks, the water goes to an adjoining chamber, which has a hydroponic plantation for tomatoes and other vegetables. Additional aeration is introduced into the system through a sequential waterfall ladder. Finally, there is a pond under the house for rearing crayfish (Astacus astacus). Water from the pond is used to irrigate an energy plantation of Salix.

ECOLOGICAL engineering is needed not only to solve environmental problems connected to wastewater, but also to create feedback loops to transfer resources from wastewater back to society.

Stensund Folkhogskola high school is an educational centre situated in the picturesque environment of Sweden's western Baltic coast. The centre hosts about 100 residents all year and they are provided with drinking water from the centre's own well. About 16 cu m of wastewater is produced daily at the centre and the problem of treating it was solved by constructing an ecological wastewater treatment facility indoors, based on the principles of aquaculture. Wastewater constitutes a resource that is used in an integrated system to produce biomass, consumable plants, fish and crayfish.

The system, which has been in operation from 1989, is housed in a villa, with a total area of about 100 sq m. Its southern portion is covered with glass and constitutes a greenhouse where the aquaculture is organised.

The total volume that the system handles is about 200 cu m and added to the flow of 16 cu m per day, gives residents a 12- day stock of water. The water quality of treated water is well below national standards for treated wastewater but as the facility is experimental.Changes have been made in its work routine since its inception in 1989 to improve efficiency. A heat pump uses recovered energy from wastewater to heat the educational centre. During the first year of operation, the total biomass yield was 1.2 tonnes, whsich yielded a crop of about 40 kg of tomatoes that was harvested and consumed by the students.