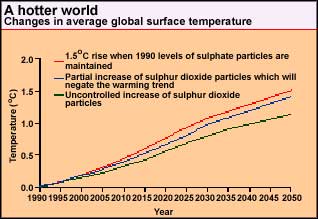  Parts of Europe and Asia including China will see more acidification in their environment in the coming years.
Agricultural land will expand from approximately 37 per cent of the total land area presently to around 50 per cent by 2050. The highest increases are projected to take place in Africa and West Asia.
The total global water demand will grow substantially from 3,000 km 3 in 1990 to 4,300 km 3 in 2050.
 Life expectancy is expected to reach a global average of just over 70 years by 2050 compared with 75 years or more today in developed countries.
The future years could foresee a population that is on average wealthier and in better health, but living in a world with scarcer resources.
 With the world economy increasing maybe five-fold and the need to reduce environmental pressures by at least by a factor of two for many problems, the efficiency of resource use should be increased ten-fold globally in the coming half-century.

these are the shocking results of a recent draft of a model-based study of the state of global environment. The world environment has undergone a major change ever since industrialisation began to feature as an important cornerstone of national economic policies. In their quest to become rich, countries turned a blind eye towards the environment. It was only in the past few decades that a green sense enveloped nations and an ecological perspective began to surface as a serious global concern. The Rio summit in 1992 resulted in the formation of Agenda 21, the global action plan for promoting sustainable development.

In response to Agenda 21, the un Environment Programme (unep) initiated a new biennial reporting series called the Global Environmental Outlook (geo). The geos are aimed at supporting the implementation of Agenda 21 by monitoring its progress, assessing the state of the environment, identifying emerging issues and giving support to priority issues for international action. As a contribution to the first geo report, rivm or the Dutch National Institute of Public Health and Environment, one of unep"s collaborating centres has made a model-based assessment of future global environment according to a "Conventional Development" (cd) scenario (see box: As is where is), developed by the Stockholm Environment Institute (sei). This scenario with a time frame up to ad 2050, is based on an extension of historical developments and trends, assuming no major social, political, technical or natural surprises or disruptions. On the basis of the modelling tools available, the assessment of the future state of the global environment focused on two important areas of interaction between socio-economic developments and the environment, namely, (a) global and regional cycles of carbon and sulphur emissions and (b) the use of land and water resources.

The geo assessments project a not-so-green future for the world. Major findings indicate that environmental pressures will build up accompanied by a change in climate; acidification will become a serious problem in some developing regions; freshwater scarcity will aggravate; and, with agricultural land expanding, the natural habitat for preserving biodiversity will shrink. Acid rain: first-degree burns on nature
The problem of acidification arises when two key conditions are met: first, a region has a high level of economic activity with intensive use of fossil fuels leading to large atmospheric emissions of acidifying pollutants. These emissions must be large enough to be transported through the atmosphere for long distances in significant quantities. The second condition is that soil, forest and aquatic ecosystems in a region are susceptible to these acidifying pollutants. Recent assessments have identified the northern and central parts of Europe, the eastern part of China and the southern parts of Asia as regions at the greatest risk of damage as a result of acidification. In the case of Asia, even with the partial controls assumed in the cd scenario, the critical loads for sulphur deposition are still expected to be exceeded substantially. Consequently, woodlands in some of these developing areas could deteriorate more rapidly, endangering agricultural production and the supplies of fuelwood and other products. The acid deposition can lead to the release of toxic metals to ground and surface water, further contaminating drinking water supplies. Clearly, if there are no controls the negative effects of acidification in Asia would be much worse.

A change for the worse
Up to now, most impact assessments of climate change have centred on industrialised countries at medium and high latitudes. This is partly because computer models predict that the largest temperature changes are likely to occur at these latitudes, but also since most research focuses on those regions where more research funds are available. Nevertheless, models also indicate that developing countries in low latitudes may experience important changes in climate, including crucial rainfall patterns.

Acidification and climate change have the same root cause, namely a high level of economic activity that results in emissions of huge amounts of polluting substances into the atmosphere. Many of these pollutants stem from the same source - burning of fossil fuels. In 1990, this accounted for over 80 per cent of the global emissions of carbon dioxide and about 94 per cent of the European emissions of sulphur dioxide (so2) the main cause for acidification of Europe"s environment. The two environmental issues are not only related with respect to their causes, but also with respect to their impacts. Recently, a better understanding has emerged as to how these two problems interact. The emissions of acidifying pollutants, especially so2, lead to accumulation of particles in the upper atmosphere which partly mask the global warming caused by greenhouse gases (ghgs). If the level of particles in the atmosphere is assumed to remain constant at their 1990 marks, the growth in ghgs would increase the global average surface temperature by about 1.5