No plutonium to go on 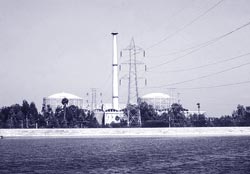 The first stage of nuclear programme is way behind schedule and is mired in controversies, but the second stage seems to have more problems in store.

When the Union cabinet sat down on September 2 last year to approve the construction of a 500 MW prototype fast breeder reactor in Kalpakkam, the prime minister was warned that the country's stockpile of plutonium was low. The nuclear programme's second stage, which is to be powered by FBRs, will depend on the first stage reactors. But the trouble is that reactors of the first phase don't produce enough of plutonium. The government planned that while producing 10,000 MW of electricity, pressurised heavy-water (PHW) reactors of the first stage would also yield about 3.2 tonnes of plutonium each year. This plutonium would then enable the construction of FBRs of 1,000 MW capacities each in the next decade. The cabinet has approved Rs 3,500 crore for the fast breeder reactor programme but the plan has a long way to go: The 500-MW Kalpakkam prototype reactor will only be commissioned in 2010 and plutonium for it has to be stocked from now.

FBRs would use less uranium with more effectively, but the problem is that they are closely linked with the performance of conventional reactors (see box: Fast breeders: why India prefers them) India's 60,000 tonnes of natural uranium deposits, which have a fissile uranium content of only 0.72 per cent, can at most generate 12,000 MW of power for 30 year.

So convinced is the government with the effectiveness of FBRs that within six months of the Cabinet's approval for the prototype reactor, DAE secretary Anil Kakodkar proposed to build four more FBRs by 2020 to achieve the target of 20,000 MW nuclear energy. "It would not be a big deal to commission four additional reactors between 2010 and 2020,'' he said. FBRs would contribute 12.5 per cent of India's electricity by 2020.

But anti-nuclear activists strongly oppose fast breeder technology. They allege that FBRs are unsafe and have been discarded worldwide. The prototype, which will be the world's first to use a plutonium-uranium mixed carbide fuel, will be based on an experimental 13 MW FBR that DAE has been running for 13 years. This experimental reactor's produces only one-third of its power-generating capacity because of technical faults.

During the 1950s, sodium-cooled FBRs fascinated the West. These reactors were hyped as the "magical solution' to the world's energy troubles. It didn't turn out that way. More than US $20 billion has been spent worldwide on building 11 plants bigger than 100 megawatts-thermal. One of these, the Kalkar reactor in Germany, was completed in 1991 but never opened because of fears regarding accidents. Six of the other 10 reactors have been shut. The Japanese Monju reactor, the latest, went critical in 1994 but was shut down in 1995.

Two other reactors, Phenix in France and BN-350 in Kazakhstan, will be shut in the next few years. Of the other two, the Joyo reactor in Japan is more of an experimental plant, being only about 100 megawatts-thermal. Only Russia has a large breeder reactor, but when it becomes operational in the next decade it will use medium-enriched uranium fuel.

" These reactors are being promoted because the government is keen to produce more weapons-grade plutonium. We are awfully short of uranium reserves that is why other nuclear fuels and untested technologies are being explored here,' says M P Parameswaran, a scientist who has worked at the Bhabha Atomic Research Centre in Trombay.

In a reply to a questionnaire sent by Down To Earth, IGCAR's associate director (safety group) S Govindarajan wrote: "There is no danger in fast breeder technology. It is as safe as nuclear thermal reactors and in certain aspects safer.' Anti-nuclear activists aren't convinced and have a list of complaints against FBRs. They say an accident is far more probable in a FBR than at a conventional reactor. The chain reaction in FBRs is sustained by fast, highly energetic neutrons, which are not "moderated' like in a conventional nuclear reactor. The chain reaction generates intense heat, which is removed by a coolant, usually a molten metal like sodium.

Sodium reacts violently if it comes in contact with water and burns on combining with air. Activists say the Superphenix FBR at Creys-Malville, eastern France, is the best example that this technology is dangerous and inefficient. Liquid sodium was first found leaking and later it was discovered that it was oxidizing between the reactor and the electricity generators. The US $6 billion reactor had also to be closed twice for repairs, and France finally abandoned it in 1998.

Crores spent but power won't be cheap
A huge amount of money has been spent on the nuclear programme but the return hasn't been that good. FBRs generally cost 50-100 per cent more to build than PHW reactors and at least twice as much to run. Even if DAE constructs the prototype reactor for Rs 3,000 crore, electricity would be expensive and cost between Rs 5 to Rs 10 per unit. Power sector experts say DAE's capital cost estimate for the test reactor is too low. The Russian BN-600 is the cheapest FBR since 1980, but the electricity it produces costs about one-third more per megawatt more than DAE's estimate for the Kalpakkam one Compared to the latest US reactor of 1980, the Kalpakkam FBR would cost Rs 22,000 crores. If the 1994 Japanese reactor Monju is used as the benchmark, the capital cost at Kalpakkam would shoot up to Rs 46,000 crore.

Govindarajan, however, doesn't believe that the test reactors will be terribly expensive. "Its cost will be comparable to that of the conventional reactors being built in India. FBRs are better because they conserve resources,' he says.