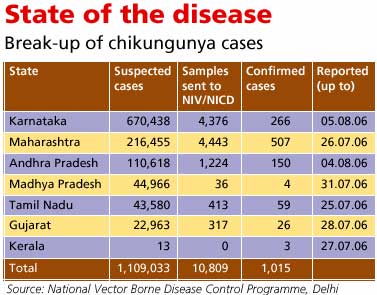 In late 2005, an unidentified disease was noticed with rapidly increasing regularity in the southern and western parts of the country. It appeared to be severely debilitating, inducing high fever and excruciating pain in the joints, which would persist much after the fever subsided. The first batch of cases was reported in the country in October that year. But it was only in December that samples in Maharashtra tested positive for the chikungunya virus, a relatively unknown quantity outside research circles, especially because it had surfaced on a major scale 33 years ago.

Almost a year on, the disease has been detected in Karnataka, Andhra Pradesh, Tamil Nadu, Kerala, Maharashtra, Gujarat and Madhya Pradesh (see table: State of the disease). There are reports that it has surfaced in Goa, Delhi and Rajasthan as well. As of August 22, 2006, over 1.1 million people were suspected of having contracted the disease.This figure is obscured in some ambiguity