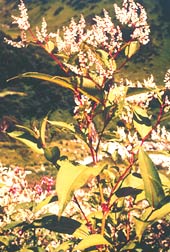 The beautiful Valley of Flowers, known for its almost miraculous flower diversity and fecundity, is caught in a strange controversy. The point of contention: is the conservation attempt proving to be the problem rather than the solution? In 1982, the valley was notified as a national park, and livestock grazing was banned in the area. For the past two decades, though, there have been a number of reports about weeds choking the plant diversity of the region. Scientists at the Forest Research Institute (fri), Dehradun, blame the weed Polygonum polystachyum. Conservationists and forest officials, on the hand, brush off this theory. They claim that the ban on livestock grazing has led to the resurgence of near-extinct plants. The author has spent about a decade attempting to arrive at an understanding of this raging controversy surrounding the Valley of Flowers.

The valley is located above the treeline zone (3,300