The policy of reduction of cattle populations from protected areas: A case study from Buxa Tiger Reserve, India 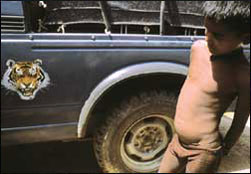 In India, as elsewhere, protected areas (PAs) have permanent resident populations who are historically dependent on forest resources for their livelihood. The Buxa Tiger Reserve (BTR), in the northern part of West Bengal, is one such reserve forest where villagers have been residing for more than a 100 years. With the creation of a national park, employment opportunities for the forest villagers, who were once treated as an important labour force during the commercial forestry regime, have drastically declined. To reduce pressure on forest resources at the BTR, the World Bank financed India Ecodevelopment Project (IEDP) was initiated with the aim to involve local people by supporting sustainable alternative income-generating activities. In consonance with the dominant view that livestock grazing in bio-diverse regions is destructive to nature, reduction in cattle populations and stall feeding of cattle have been included as reciprocal commitments under this project. This paper is an attempt to assess whether the strategy of cattle reduction is really possible.