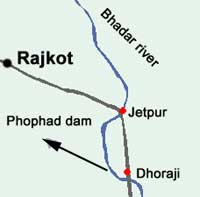 l Solur, Tamil Nadu, May 1983. Investigations reveal that tanneries in nearby Ambur town have been releasing acidic waste into the river Palar, making the water toxic and unfit for drinking.

THESE are now well-known cases. But the story of Dhoraji town in Rajkot district, Gujarat, goes back further. The residents began agitating against pollution of the river Bhadar, their source of drinking water, in 1978. When public protests proved ineffective, they filed a petition. The case dragged on for 14 long years. On August 5, 1997, the citizens of Dhoraji won the case. The Gujarat High Court ordered the polluting units in Jetpur upstream of Dhoraji be shut down till effluent treatment plants were installed. A fine of Rs 1.25 crore was imposed on the industry. The government has recovered one-third of the amount, but the petitioners