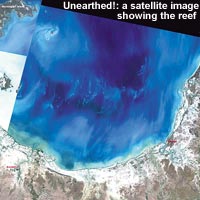 Scientists from the Geoscience Australia expedition have discovered an uncharted 120-square kilometre (sq km) coral reef in Queensland's Gulf of Carpentaria. The reef is so far said to have escaped notice because of its remote location and due to the fact that a large portion of it lies about 20 metres (m) below the sea surface. The nearest major settlement is Karumba town, which is 250 km to its southeast.

Scientists say the reef could have been formed 40,000-80,000 years ago, when sea levels were 30 m lower than at present. It was formerly believed that reefs could not thrive in the warm muddy waters west of the Great Barrier Reef's northern limits. This discovery, therefore, comes as a pleasant surprise.