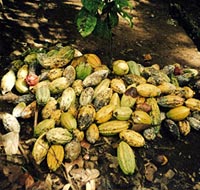 Chocolate is an easy temptation as well as a universal one. So proves the recent siege on cacao crops in Guatemala. A particular variety of fungus with a weakness for cacao beans (source of chocolate) is currently posing a threat to this major crop of Guatemala. The plant disease, moniliasis, is already prevalent in Honduras and El Salvador. "As much as 80 per cent of the cacao crops could be lost in six of Guatemala's 22 departments,'' laments cacao expert Erich Eger. Guatemala produces 1,100 tons of dry cacao annually.

In Honduras, the same thing happened. Says Eger, "They thought the fungus (Moniliophthota roreri) would never reach them, but when it did, their production dropped 80 per cent.'' Honduras produced 4,500 tonnes of cacao in 1997, but just 900 tonnes in 2003. Engineer Eduardo Hern