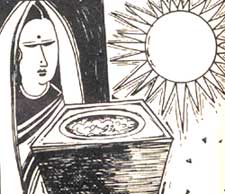 Gandhian activist M K Ghosh can rightly be called the father of the solar cooker which is being promoted in India today. When he was in prison with Rajendra Prasad during the Quit India Movement, Prasad offered him Rs 5,000 to design a working model of a solar cooker.

Ghosh's cooker was a double-walled wooden box with a double-layered glass window and an adjustable mirror. Solar radiation, which entered directly through a glass window and through reflection from the mirror, got absorbed by the black inner surface. Temperatures reached up to 90 C.

This model attracted worldwide attention because of its simplicity. Once the food was kept in the box, it did not require constant supervision and there was no danger of it burning. The cooker's main drawbacks were that it could not cook food on a cloudy day. Moreover, since it could not fry food, chapatis could not be cooked on it.

Ghosh's model did not attract much attention while he lived. Conventional fuels were abundant and cheap and people were sceptical about cooking without any fuel or fire. Besides, it did not receive much support from the government.

The first parabolic solar cooker was developed in the early 1950s by M L Ghai at the National Physical Laboratory (NPL) in Delhi. Although NPL launched it in a big way in the presence of the then Prime Minister, Jawaharlal Nehru, the aluminium sheets used as a reflector surface were not durable. This and the fact that it required shifting around to catch the sun made it an unattractive proposition for the public.

The 1970s saw voluntary agencies, inspired by E F Schumacher and involved in the development of appropriate technology, come onto the scene in a big way. By this time, the energy crisis had started manifesting itself and the energy needs of the rural poor required attention.

Mohan Parikh of the Agricultural Tools Research Centre (ATRC) made improvements on M K Ghosh's cooker in 1976 and came up with an inexpensive model which rural people could afford. It was made of wood and used paddy husk for insulation.

Materials like hardboard, cement sheets and boxwood were also employed by M M Hoda of the Appropriate Technology Development Association (ATDA) in Lucknow to build his janata cooker. ATDA came up with a still cheaper kisan cooker, insulated with paddy husk and plastered with dung. Costs were thus cut down by 50 per cent.

Hoda incorporated a 200-watt electric light bulb into the existing design and demonstrated how the cooker could be used even at night to cook rice, dal and vegetables within two hours. Nearly 50 per cent of the cookers sold by ATDA have had these bulb attachments.

Steam cookers were developed by Chaman Lal Gupta of the Auroville Centre for Environmental Study, Pondicherry. Steam was raised in a solar water heater and then used to cook food in a pressure cooker enclosed and insulated from all sides. But only boiled food could be prepared in this cooker and the cook had to work outdoors.

Research on solar cookers has remained the enclave of amateur innovators, inspired by Gandhi's rural ideology. It is strange that this technology which can reduce women's workload enormously has received almost negligible attention from the country's established scientific community. Official efforts have been sporadic and ad hoc.