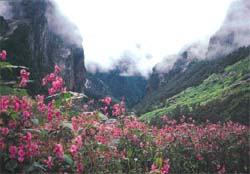 Unfortunately, the Valley of Flowers National Park in Uttar Pradesh, one of the state's major tourist attraction, is gradually deteriorating. A report published on April 4, 1993, in The Indian Express , pointed out that this region once boasted of some 1,500 varieties of flowers and numerous ferns. Today, the number is believed to have greatly declined. Several flower species have already disappeared.

The valley, which hosts a rich variety of flowers due to its unique pattern of wind, snow and rainfall, among other things, is fast turning into a jungle of weeds, dominated by the tall and fast growing Polygonum polystachum , and this is threatening the existence of many flower and fern species. Seedlings of the weed usually emerge during the months of May and June. The cattle trample the seedlings, checking the proliferation of the weed.

However, when the area was declared a national park, grazing was banned. No studies were carried out on the impact this ban would have on the plant community. Instead, the decision came overnight in response to the demands of conservationists, who felt that the grazing was beyond the carrying capacity of the park.

Anupam Joshi, formerly a professor of botany at the University of Delhi and now a senior research officer in the environment and forest division of the Planning Commission, says, "Its competitive superiority over other species by utilising greater resources makes Polygonum polystachum an obnoxious plant."

"Grazing helps maintain a nutrient gradient across the park, the absence of which would lead to litter accumulation, also destroying young seedlings [of weeds] each growing season," Joshi explains. This causes an increase in nutrient-rich habitat, eventually leading to a total change in the functioning of the ecosystem.

In the absence of grazing, the weed has to be mechanically uprooted, which is not an effective measure. " Polygonum polystachum does not propagate through seeds but through rootstocks. When the plant is removed mechanically, even if a little root stock remains in the soil, it regenerates itself," Joshi explains. "Moreover, it will be an expensive process because of the vast area of the valley," he adds.

However, Joshi points out that the government has not taken any action, though some recommendations have been made. Laments Joshi, "They have not been implemented so far."