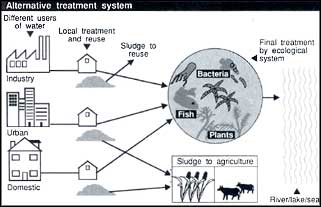 THE MANAGEMENT of water quality is closely related to almost all human activity and, therefore, is of great concern for all.

Wastewater, or water polluted to a degree that is harmful to the environment and useless for human beings, is the result of several natural processes as well as all human activity. The difference is that nature has learned how to treat its own residual products and maintain sustainability, while human beings have not. About 10 million chemical substances have been produced by human beings and only about 1 million of these have been tested for toxicity. Furthermore, only a few of them are discussed and even fewer are removed in water treatment plants.

As the world community now realises there can be no sustainability given the increasing levels of environmental degradation, it is time that actions are attempted that would have the greatest impact on pollution control.

When dealing with water pollution, three options present themselves. Of these two are important, whereas the third, end-of-pipe treatment, which involves first creating polluted water and then treating it, is a sign of society's failure to organise itself in a non-polluting manner.

The first option is to prevent pollution by influencing the processes of manufacture, transportation, mining, agriculture, energy production, consumption and so on. For instance, some industries could quite easily switch from wet to dry production or at least the use of water could be minimised. Water consumption of water could be decreased through both technical and legal measures though this process is both difficult and time-consuming.

The second option is to control pollution by adopting measures for local treatment and reuse close to the production stage. This makes it possible to adjust the treatment processes to the kind of effluents that emanate from a particular plant. It also works out to be cheaper because it does not require expensive pipes bringing effluents to huge treatment plants. Even more important, on-site treatment of this kind makes it possible to recover and reuse resources (nutrients, minerals, metals, chemicals) that are often present in effluents.

The third option, which is also the most expensive, should be resorted to only if the first two don't work. Unfortunately, this end-of-pipe, high-technology approach is the one that most industrialised countries favour even though they still face they problem of efficient disposal of wastes resulting from the maintainance of the high-tech plants.

It must be remembered that even sophisticated water treatment plants do not eliminate the most hazardous substances. Municipal wastewater, mixed with stormwater and industrial effluents, is difficult to treat even in the most advanced plants. They transfer heavy metals and other non-degradable toxic elements into the environment and cause chemical contamination of surface waters and aquifers, endangering groundwater resources. Other options
Many developing countries and some in eastern and central Europe face the problem of their economic, industrial and agricultural development projects causing enormous environmental degradation. As a first step, it is vital that these countries control the pollution that is caused by the release into the environment of different kinds of untreated wastewater. Conventionally speaking, this would mean constructing thousands of municipal and industrial treatment plants. But is this really the answer?

Countries that have not set up the infrastructure for water treatment have two options available to them: the first, expensive one that adopts in toto the conventional wastewater treatment technology of highly industrialised countries and the second, to put effort and money into developing new, cost- effective, ecologically sound, sustainable technologies based on an understanding of the cyclic nature of natural material flows. Technologies of this kind are already in existence and are being further developed in many industrialised countries. Yet there are no economic incentives to use these technologies in the developing world. On the contrary, there are strong economic interests promoting conventional technologies.

There are several reasons why high-tech solutions for treating water are not feasible for developing countries. The first, of course, is finance. Poland, for instance, would require 200 large and about 2,000 medium and small treatment plants to treat municipal wastewater. In addition, several hundred plants would be needed to treat industrial wastewater. For a country facing severe economic problems, acquiring such facilities is not practical. If conventional technologies were applied to all aspects of water use and sanitation in the developing world, the investment required would increase from US$10 billion per year at present to US$ 50 billion per year by 2000.

A second reason is the amount of energy required to construct and run conventional wastewater treatment plants. On a worldwide basis, the increase in power consumption would be from an estimated 275 GWH in 1990 to 538 GWH by 2015, which is totally contradictory to the Bruntland Report goal of reducing energy consumption by 50 per cent over the next 40 years.

Finally, there is the question of wastage of valuable resources. Conventional technology is not only expensive in terms of energy and capital, but also wastes resources such as nitrogen and phosphorous that are basic compounds necessary for all biomass production, which is present in all types of wastewater.

Outdated principles
Conventional water treatment technology is still based on the outdated principle of dilution. Chemical substances that remain in treated water, simply get diluted in rivers and seas. Substances in sludge are spread on land and ultimately contaminate groundwater.

If treatment technology is to be sustainable, it should close cycles of matter and energy. High-tech treatment plants mineralise only a few organic substances and some nitrogen is released into the atmosphere from where it was originally taken. All the other substances are only chemically changed and deposited, mostly as sludge. Nitrogen removal takes place only to a limited extent in conventional treatment processes. In other words, the problem of pollution is only transferred from the water-phase to ground/soil-phase in the matter-circulation cycle.

In this context it is important to publicise that there are viable alternatives to conventional treatment. People should be educated about available alternative approaches and technologies. An inventory and evaluation of non-conventional water treatment technologies should be conducted by international organisations such as UNESCO and the information made available to all countries, especially of existing alternatives such as soil infiltration and ecological engineering.

Soil infiltration
Natural soil or an artifically created bed of sand or gravel can constitute a highly efficient and inexpensive wastewater treatment system. The bacteria that develop in a layer of soil, irrigated by a carefully calculated load of wastewater, are able to decompose organic and toxic substances and bind metals chemically. A carefully designed soil system works in a manner similar to the aerobic and anaerobic processes that are the basis for conventional treatment plants. Infiltration of this kind removes at least 50 per cent of phosphorous and 99.9 per cent of coliforms (harmful bacteria) and pathogens, which is in the same order of magnitude as in the active sludge process. Nitrogen removal can also be high. Soil infiltration can be used successfully in treating municipal wastewater and several types of industrial effluents. This method is in effective use in about 1,000 treatment units in Sweden and in Poland, it was assessed about 60 per cent of all wastewater treatment could be met through this proccess, whose cost is about 10 per cent to upto 10 times lower than conventional treatment. However, using this technology needs care because the soil infiltration units need to be prepared with a great deal of knowledge and experience. They work best only if the pollution load per surface unit is carefully calculated in relation to the type of soil and geohydrological conditions. If the permissible load is exceeded, the bacteria may be damaged and the treatment process could come to a stop.

Many Asian countries -- China, in particular -- have a long tradition of ecologically sound wastewater recycling in multi-level biological systems, based on aquaculture. These systems, developed over centuries, are based on the sound economic principle that all available resources, including wastes, should be used. Unfortunately, these practices have come to be regarded as old-fashioned and tend to be abandoned.

The science of ecology has developed a great deal since the days when the Chinese evolved their aquaculture systems. Modern ecology can be used to design artificial viable ecological systems that can help humans immensely. In ecological engineering for wastewater treatment past experiences and modern science can be coupled to benefit both people and nature. Ecological engineering, also known as ecotechnology, is based on the interaction between humans and nature, to the benefit of both. It aims not only at treating wastewater methods but also at utilising and recycling resources from the wastewater itself. For instance, major plant nutrients such as nitrogen and phosphorous are present in municipal wastewater and ecotechnology techniques use these nutrients for biological production.

Ecotechnological solutions can consist of natural or engineered ecosystems, with varying degrees of human interference. Ecotechnology aims basically at designing ecosystems that can solve present environmental problems. But in the long term, ecotechnology can provide the basic science and technologies needed to control various kinds of pollution and reconstruct the landscape in an ecologically sound way.

Several alternative, energy-saving and environmentally sound technologies for treating domestic and industrial wastewater are now being developed -- and some of them look very promising. But, unfortunately, there is practically no communication between sanitary engineers dealing with conventional treatment systems and ecologists developing new biological systems. It is obvious that real progress can be achieved only if these two disciplines are merged.

Most researchers agree that constructed or artificial wetlands have the potential to provide low-cost, low-maintenance biological treatment for primary or secondary effluents. Artificially created biological systems can complement or substitute for conventional treatment facilities. The use of wetlands and plant filters for treating wastewater may become a major method in developing countries that have yet to construct conventional treatment plants because of financial constraints.

There are several reasons why modern small-scale, source- control and recycling methods are not encouraged in industrialised countries. There is a certain inertia and unwillingness to admit errors in thinking that has resulted in the present problems. Besides this, most scientific and technical research is still devoted to developing conventional systems rather than exploring new, environmentally-sound, low-tech solutions. And, finally, companies marketing high-tech technology have a vested interest in ensuring their equipment is used.

Equally serious is the lack of communication between the people dealing with environmental problems and with pollution abatement. Sanitary engineers do not communicate with ecologists, city planners do not cooperate with hydrologists and so on, thereby hindering the finding holistic solutions to related problems.

As pollution of the earth represents a major threat to all species including the human race, it is obvious that all these constraints have to be removed. Low-cost, environmentally sound methods of water treatment and pollution prevention are a necessary condition to pave the way towards sustainable development.

Janusz Niemczynowicz is an associate professor of hydrology at the University of Lund, Sweden