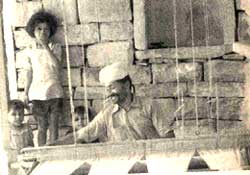 A visit to Kabir Basti, 60 km from Jaisalmer, reveals an affluent village of about 70 households. Every house is a pucca structure, made of the local yellow granite and arranged in neat, well-planned rows, with plenty of space in between. The children are healthy, the village has its own drinking water wells, gram sabha (village assembly) building and high school. A closer look reveals that the weaver community here has achieved prosperity by skilful management of its only resources -- human skills and wool -- both democratically and equitably.

Fifty-four-year-old Khusala Ram is the force behind this village. Says Khusala, "Agriculture in the desert could, as we realised, be an occupation by which we could survive. It rains one year and then there's drought for four years. We wanted to live with dignity and give our children a better future. Our most important sampada (resource) was the desire to be independent and well-off. We knew that we could not do this individually -- it had to be all or none."

Till 1959, the Meghwals were a part of Parevar village, 10 km away. Poverty, malnutrition, alcoholism and oppression at the hands of the dominant caste, the Rajputs, was their common lot. They owned the barren, arid land to one side of the village.

In the 1950s, Bhagwandas Maheshwari, a young Gandhian of Jaisalmer who sympathised with their plight, borrowed money from a local sahukar (moneylender) to construct a khadin (traditional water harvesting system to irrigate fields) for the Meghwals. But the khadin was washed away by heavy rains in 1958. Several old wells stood revealed. Now that the Meghwals had water, they decided to break away from the dominance of the Rajputs.

Says Amolak Ram, the present adhyaksha, recalling those days, "Earlier, we owned the land, but had no water. Then we got the water. Why should we have continued as slaves any longer? Each one of us wanted to be free." From then on, there was no looking back for Kabir Basti.

The village was formed in 1960. Agriculture became a subsidiary occupation and the whole village got involved in the khadi wool industry. In fact, in 1964, they broke away from the district khadi unit to set up their independent establishment for procuring raw materials and selling the finished product. Almost every family today owns a house in the Bunkar Basti of Jaisalmer, but the town houses are used more as residential quarters for the young, especially college students.

In 1981, the village got registered under the Rajasthan Gramdan Act of 1971, a unique legislation which empowers villagers to manage their own resources. Today, 11 villages have joined the khadi cooperative of Kabir Basti. Parevar is one of them. Kabir Basti provides livelihood to nearly 2,000 people. They do not have any animosity towards the Rajputs, even those of Parevar. They have a better standard of living than their erstwhile lords and they want them to grow as well. Says Amolak Ram, "They cannot take away anything from us. We do not mind if they use our example to improve their lot."

The villagers meet almost every other day. Says a villager, "We have to, otherwise our business will suffer. With an annual turnover of Rs 25 lakh, important decisions have to be made almost daily. Everybody is involved." The women do not attend the meetings, but apparently, all important decisions are discussed with the gharwalis (wives).

"Of course we fight a lot between ourselves," says Khusala Ram, and adds that it is always better to sit in a circle at meetings because when "you face each other you can shout better". But no fights leave the village. Every one bows down before the collective will. And the collective will is often so strong that even acknowledged leaders have often had to bow down before it.

But luckily for him, by 1970, the villagers had recognised the real enemy and brought him back to the village. He is a happy man today because four boys from the village, who got educated in Jaipur and Jodhpur, have come back to work in Kabir Basti. They teach in the school and are active in village affairs. He knows the village is in safe hands. "Now I am not bothered about what will happen to our village when we die," he says.

He finds the government efforts to afforest the desert amusing, "They come and do what they feel. Initially, I tried to tell them what species to plant, but they didn't bother to listen to me. I would object to their planting in the middle of a drought. Each sapling needs about two buckets of water a day for at least two months. Those jokers should realise that if we had so much water, we would have grown wheat instead."