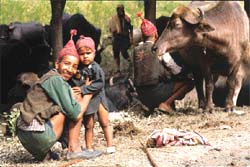 While wildlife scientists believe forest officials have very little technical knowledge, the latter feels that scientists are "conducting research for their objectives of impressing funding sources" rather than on need-based criteria. It's a virtual war of words between the two groups. The obvious result: gross mismanagement of protected areas and the people living in and around them.

"This is largely a result of the communication gap between scientists and field managers," says Bittu Sahgal, editor of the magazine Sanctuary Asia and a member of the steering committee of Project Tiger. R J Ranjit Daniels, scientist at the Chennai-based M S Swaminathan Research Foundation (mssrf), believes this gap is "deliberate".

"Mismanagement in wildlife is due to clash of interests," says V B Savarkar, joint director of the Wildlife Institute of India ( wii), Dehradun.In this clash, science has been consigned to the backburner. S C Sharma, additional inspector general of forests (wildlife) with the Union ministry of environment and forests (mef), puts it down to "professional rivalry" between the two groups.

What scientists say?
"Our research papers are just lying on the racks of forest offices," laments A J T Johnsingh, head of the faculty of biology at wii , the country's premier wildlife research institution. "Policymakers do not truly understand the need for incorporating scientific research results into wildlife conservation," says K Ullas Karanth, programme coordinator in India for the Wildlife Conservation Society in Bangalore. Mahesh Rangarajan, policy analyst and former fellow of the Nehru Memorial Museum and Library, New Delhi, says the notion of wildlife management in India is straight from the Stone Age and "some of the methods used, such as counting by sighting, are not used anywhere else in the world". He says that long-term studies on forest fires are also non-existent.

Valmik Thapar, conservationist and member of the Project Tiger's steering committee, talks about the difficulties in obtaining research facilities for scientific projects. The abstracts of the National Seminar on Wildlife Conservation, Research and Management at the wii mention the lack of basic data on spatial extent of forest fire burns and frequency of occurrence over a period of time. It stresses the need for such studies to help manage and protect parks.

The problem runs deep. Johnsingh points out that policymakers change their office so frequently that it causes discontinuity of thought and action: "With no political dedication and interest, there can be no conservation activity." Thapar feels the mef is more involved in clearing big projects rather than concentrating on conservation.

Another concern which scientists voice is that of limited technical knowledge among the Indian Forest Service ( ifs ) officials. "The courses provided by the wii for forest officials are undersubscribed," Thapar points out. The few officers who undergo training do not get postings that involve management, and their technical knowledge does not reach their subordinates, he explains.

Clearly, one deep-rooted problem lies within the ifs set up, with officers who do not have enough knowledge of the subject. Their training programmes do not cover the subject adequately. "There are 16,000 forest officials in India who have no clue about using science in wildlife management," rues Thapar. "How will new ifs officers gain technical knowledge when they are trained by their seniors who do not have proper training?" asks a wildlife researcher. "And even if they do, once it trickles down to the level of the field official who implements the decisions, he/she cannot figure out head nor tail of what is going on," Thapar points out. But a part of the blame goes to the scientific community that has failed to drill any sense into India's foresters. And, of course, to the politicians, who know next to nothing.

Of researchers and ivory towers
On the other side of the fence sit the wildlife bureaucrats. Sharma of mef complains that scientists in India are only interested in contributing to foreign magazines and that, too, in a technical language. "Science is adopted only if it is understandable to the manager. Scientists are too lazy and do not make good salespersons. They are supposed to provide options to the user." He feels the problem is two-fold and the atmosphere not congenial for scientific training: "Scientist are more interested in joining the elite club. "

Thapar, too, complains that the scientific faculty is slow and often fails to provide desired results due to lack of focus on the issue: "The director of Project Tiger is open to recommendations. But there has been no communication from the wii director." But says Daniels, "This is the main drawback of wii. It is guided by ifs officers, and not scientists." The buck is passed between scientists and forest officials.

Some scientists feel it is unfair to blame the policymakers as much of their research does not address specific issues and fails to produce desired results, says Charudutt Mishra, a wildlife ecologist at the Nature Conservation Foundation, a non-governmental organisation ( ngo ) based in Mysore, Karnataka.

Given the mutual lack of trust between the two professions, it is hardly surprising that research findings rarely translate to the implementation level. "Instead of working towards and achieving mutual conservation objectives, park managers and the wildlife researchers clash over insignificant turf battles," says Yadvendradev Jhala, scientist at wii. "In such instances," he adds, "wildlife research and conservation bears the brunt of unaccomplished objectives, even as time or funds for projects run out."

Leave alone the scientific part, wildlife management itself does not exist at all in India, says Ravi Chellam, scientist at wii . "It is more of civil engineering [because of the huge amount of money allotted to infrastructure development within protected areas]," he adds. Says Johnsingh: "There is no such thing as wildlife management. We are merely trying to protect wildlife."

So, who suffers? Not the foresters or the researchers but those who live in the forests and depend on them: the forest-dwelling communities and the wild animals. "Incorporating science in wildlife conservation strategies is necessary, whatever be the administrative system of wildlife management. Animal-people conflicts arise out of the basic incompatibilities between researchers and forest officers," Karanth concludes. But, very often, people living within protected forests are blamed for the destruction of forests.

In the words of M K Ranjitsinh, an Indian Administrative Service (retired) officer and former director of the Tiger Conservation Programme of the World Wide Fund for Nature ( wwf )-India, "The interests of the np or sanctuary are first and foremost, and when an area is designated as protected, everything else, including humans, is secondary." His solution is simple: "Rehabilitate the people in the vicinity." It is solutions like this that has given rise to conflicts in protected areas. (see interview: "There was no such thing as Van Gujjars" ).