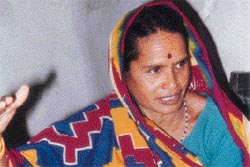 There was a time when people from other villagers were not interested in getting their daughters married to men from Guraiya village. They had a reason. During summer, the women were forced to carry drinking water from the river Bebas, three kilometres away. Now, it is the other way round. Women from Guraiya do not like to get married elsewhere. Besides availability of water, they may never get the freedom to live their life on their own terms in any other village.

Under the Rajiv Gandhi Mission for Watershed Development ( rgmwd ), which was introduced in Guraiya in May 1997, the village has undergone a metamorphosis. The once-brown landscape is verdant and water shortage is unheard of. More importantly, it is women power all the way. All the members of the Guraiya Watershed Committee (gwc) are women.

Earlier, we found it difficult to convince women to take up the responsibility as they were never involved in the decision-making," says Alok Kumar Jain, project officer, gwc . Many people also protested against the government's decision to have women run the committee. "Even the sarpanch was not ready to cooperate," says C L Namdeo, gwc 's project implementing agency officer.

It was only after Smita Ghate, the then assistant collector of Sagar district, stepped in that the women started opening up, says Hariranjan Rao, chief executive officer of Sagar zila panchayat .

In the first phase, the women were trained in various aspects such as pregnancy, childbirth and sanitation. Finally, a committee of 12 women was formed for the work of rgmwd. With the help of government officers, they took up the task of building check-dams and cattle-proof trenches. They have constructed an 18,124 metre (m)-long contour trench, 2,000 m-long cattle protection trench, 5,145 staggered trenches and three boulder check-dams.

For Jagat Singh, a landless villager, the mission has become a source of income. "I take care of the forest regenerated by the villagers and I am paid for it," he says. "Everybody has benefitted from the scheme," says Radha Bai, who looks after the nursery.

There is a startling change in women's attitudes, too. "They have become more confident and bold," says Singh. "Since my marriage in 1964, I have seen everyone scrounge for water. And the land was barren. In just two years, things have changed. I have realised the importance of being a woman. We have an identity now," says Sitabai Choubey, president of gwc.

"They have become better in technical aspects of the watershed development programmes, too," says Ghate. "And they are demanding more work from us," adds an excited Rao.

Asked if the women can continue the work even if the government withdraws the scheme, Choubey says: "We can definitely handle the work even without government help. Now we are aware of the work. We still don't know many things but we will definitely learn everything soon."