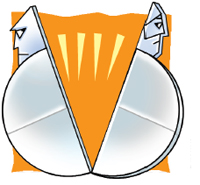 rbx11160, the much-touted first anti-malarial drug developed by drug major Ranbaxy's public-private partnership, will not be out until 2011. The drug may also not be available at a price the poor can afford.

A Geneva-based ngo, Medicines for Malaria Venture, has decided to stop funding rbx11160's research. After reviewing the preliminary process of research, the ngo found that the project might not fulfil its potency, efficacy, safety and cost criteria.

Venture's officials say that the institution will rather spend on more suitable drugs.

Ranbaxy, however, plans to continue developing the drug. "We will be conducting further trials and are confident that the drug will progress well,' says Malvinder Mohan Singh, the chief executive officer of Ranbaxy Laboratories Limited. The company says that it strongly believes in the potential of the drug for effective treatment of malaria.

The company says it is also confident that the drug's prices will be affordable. "Ranbaxy's goal is to bring this drug to market expeditiously at prices affordable to the masses,' Singh says. But increased investment in its research by Ranbaxy may impact prices.

Industry observers, however, say the company has already found alternative sources for funds, but sharing intellectual property rights with new partners may complicate the situation. The Venture spokesperson says the ngo now has nothing to do with the pricing of the drug.

In May 2003, Ranbaxy entered into the partnership to develop rbx11160, which is a synthetic peroxide and may replace herbal drug artemisinin, the only drug which treats malaria caused by Plasmodium falciparum.

With increased demand for the chinese herb, Artemisia annua, it has become difficult to procure artemisinin in sufficient quantities. The expensive and long extraction process makes the herbal drug at least 10 times more expensive than the existing malaria therapy.

The company is now likely to work on a combination of rbx11160 and piperaquine, another anti-malarial drug meant for enhancing rbx11160's efficacy.