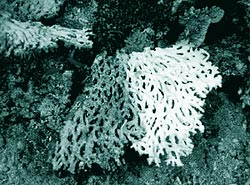 it is widely believed that coral bleaching is an epidemic which may soon kill half the world's reefs as climate change raises sea temperatures. What has been recently found is that some bleaching may actually be an infectious disease spread by a worm. Israeli scientists say they have studied a coral species, whose bleaching is triggered by a bacterium transmitted by a coral-feeding worm. If the same is true for other corals, scientists may be able to prevent the disease by targeting the worm vector.

The phenomenon was discovered by Yossi Loya and Eugene Rosenberg, who led a team from Tel Aviv University, Israel. According to them, the bacterium