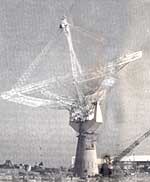 NEW discoveries in astronomy are sometimes linked to serendipity. It was by chance that astronomer Alexander Wolszczan and his team at the Pennsylvania State University found evidence for what appeared to be the first planetary system outside our solar system. Another 3 years of data on the finding has confirmed the existence of two planets revolving a star trillions of km away.

In 1990, Wolszczan and his colleagues were searching for millisecond pulsars -- dense stars that regularly emit pulses of both visible light and gamma radiation 1,000 times a second. Using the 305-metre Arecibo radio telescope in Puerto Rico, they found instead a pulsar that was irregular in its signals. The researchers analysed the variations in signals from the pulsar, which is referred to as PSR1257 + 12, over a 486 day period, which revealed that the celestial body seemed to 'wobble' from its position as fixed by the radio telescope, every 66.6 and 98.2 days.

On the basis of 3 years of fresh data on PSR1257 + 12, the scientists contend that the irregularities are caused when the pulsar is pulled to and fro by the gravitational pull of 2 planets orbiting it.

The planetary system discovered is located in the constellation Virgo, over 11,260 trillion km away. The 2 planets move in circular orbits, taking 98.2 and 66.6 days to revolve around the pulsar. The unnamed planets are 2.8 and 3.4 times respectively the mass of the Earth and orbit the pulsar at distances of 0.36 and 0.46 AU (one AU, or astronomical unit, is the distance between Earth and the Sun -- about 149 million km). Interestingly, the scientists have also discovered that these planets are 'second generation' planets, much younger than the pulsar they orbit.

The research team rules out the possibility of life on the 2 planets. The heavy dose of radiation released by the pulsar, explains Wolszczan, will make these planets inhospitable.

Nirupama Raghvan, the director of the Nehru planetarium in Delhi, says that the discovery poses a challenge to theoretical astrophysicists to explain the formation of the second generation planets. Govind Swaroop, among India's foremost radio astronomers and director of the Giant Metrewave Radio Telescope, based in Pune, says that till now most attempts to search for extrasolar planetary systems were made using optical telescopes. But this discovery, he says, provides to astronomers searching for other planetary systems a new method of using radio telescopes.

Publication Date:
14/06/1994
Down to Earth
Tags:
Science And Technology, Astronomy, United States Of America (US), Planets