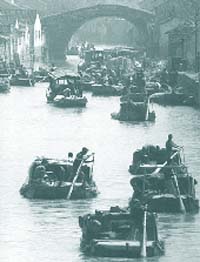 The Yellow River of China may soon dry up. The reasons behind this are drought, deforestation and mismanagement of water waste. "The situation has worsened significantly since the beginning of the 1980s,' says Cao Mingming, professor of environmental geography at Xibei University located in Xian city. Mingming believes that exploitative activities upstream are responsible for reducing water levels downstream. The water levels are three time less than they were 50 years ago. Yue Leping, professor of geology at Xibei University, claims that the decrease in water levels is also due to the unnecessary use of water by the farmers of the northern region. Farmers in the northern province of Ningxia use five times the amount of water for irrigation than the southern farmers. Factories are also wasting a lot of water. At least 40 per cent water usage can be easily reduced, Leping said. The Yellow River, often called the sorrow of China, has overflowed more than 1,600 times and has changed its course 26 times in the past, killing hundreds of thousands of people.