For a clean sip 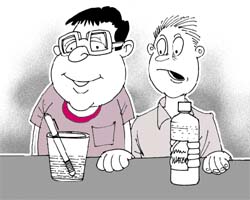 researchers in the us have developed a pen-shaped battery-operated device that can quickly and safely disinfect contaminated drinking water. This device can prove to be highly useful for travelers, soldiers and victims of natural disaster.

The operation of this device is very simple: just remove the pen's cap, remove a salt pellet and drop it in the cartridge. Then screw the top back on, shake the device and then wait till the device stops vibrating. Now you have a solution to disinfect around a litre of water. This method would replace chemical disinfectants like chlorine or having to boil water before drinking.

The pen has been developed by Miox Corp of Albuquerque, New Mexico, with funding from the us department of defence."In developing countries, the level of microbes is obviously unknown, but even if the load is high we are able to reduce the infectious loads to a rate that is not detectable," says Mark Sobsey, professor of environmental microbiology at the University of North Carolina at Chapel Hill. He also directed a laboratory study on the device, the results of which were presented at a meeting of American Society of Microbiology.

The device disinfects water by generating mixed oxidants, including chlorine, from a sodium chloride (common salt) pellet. It even reduces levels of cryptosporadium, an intestinal parasite that is resistant to chlorine. On a much larger scale, similar devices are used to purify public water supplies, including those of cities of Santa Fe and New Mexico, says Sobsey.

The researchers have tested the pen against various microbes including bacteria like the deadly e coli , bacterial spores, viruses and cryptosporidium, which has been known to exist up in public water supplies. "There was a dramatic reduction of all test bacteria and viruses within one to ten minutes. There was also extensive inactivation of cryptosporidium," says Maren Anderson, one of the researchers.

According to the researchers the pen is likely to cost around us $100. It can be used repeatedly with new salt tablets and a working battery. The resulting water has no chlorine smell despite the fact that the electrochemical reaction produces chlorine, researchers said. Sobsey added that the disinfecting pen produces no unwanted byproducts than the chlorine, which is typically used. Currently the pen is being field tested on a military base.