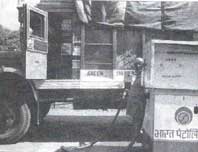 T MAY soon be possible to clean up oil spills that contaminate the soil in and around petrol pumps, thanks to the efforts of Dutch researchers. Koen Weytingh and his colleagues from the Technical University of Delft and De Ruiter Milieutechnologie in Halfweg, ,he Netherlands, have developed a technique that uses sound wave s to break up oil droplets present between grains of soil (New Scientist, Vol 146, No 1980).

The method commonly used for cleaning contaminated soil involves digging it and replacing it - which might require demolition of the building housing the petrol pump, if the soil underneath it needs cleaning. Other methods include pumping out the groundwater or use of oil-digesting bacteria, but these techniques remove only the hydrocarbons which are more soluble in ground water. The heavier hydrocarbons remain trapped in large droplets between soil grains .

Weytingh and his colleagues have been trying to use sound waves to break up droplets containing the heavier fractions of hydrocarbons, so that they could be easily washed out. The researchers passed sound waves, at several frequencies, through 2 columns of wet sand contaminated with diesel fuel and then compared the amount of oil that could be removed from each column by pumping water through the 2 sand beds, until no more soil emerged.

According to Weytingh, high frequency sound vibrations tend to be damped by the groundwater, thus limiting their usefulness. But low frequency sounds were found to be effective, he says. Following the success in laboratory, the Dutch researchers are now trying to incorporate sound waves in large scale clean up systems.