A close encounter with Jupiter's secrets 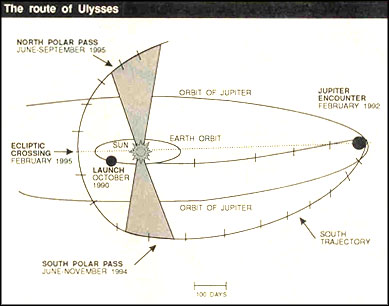 EN ROUTE to the sun, the spacecraft Ulysses dropped in on planet Jupiter in February this year. Launched on October 6, 1990, by the space shuttle Discovery, Ulysses -- a joint venture of the National Aeronautics and Space Administration and the European Space Agency -- has sent home valuable information on the largest planet in the solar system (Science, Vol 257 No 5076).

The trip to Jupiter, as illogical as it seems, was necessary. As early as 1959, space scientists started dreaming of a mission to study the unexplored north and south poles of the sun. But no rocket then or even now was powerful enough to boost a spacecraft directly out of the plane of the solar system, known as the ecliptic.

Difficult launch Launching a probe out into interplanetary space is complicated, as it has to be shot off the earth, which itself is a rapidly moving platform -- whisking around the sun at 30 km a second. To leave the ecliptic, a space probe has to lose much of that velocity.

It wasn't until the 1970s that space engineers realised that they could launching a spacecraft towards Jupiter and let the planet's powerful gravity cut the craft's momentum and hurl it into an extra-ecliptic orbit that would take it over the sun's poles.

This brief but essential sidetrip to Jupiter afforded the best opportunity since the Voyager missions of the 1970s to collect data on the environment of the Jovian system. Jupiter is a strongly magnetised, rapidly rotating planet. Ions, mostly sulphur and oxygen, are emitted from the Jovian satellite Io to form a large plasma torus or ring of ionised gas along its orbit. Unlike Voyager, Ulysses was able to penetrate the torus and probe its properties. Observations made from ground-based instruments and the Hubble space telescope during the fly-by helped fill in the picture.

Ulysses travelled, for some 12 days, through the planet's magnetic cocoon or magnetosphere, which is the largest in the solar system. Previous missions have shown Jupiter's magnetosphere to be a dynamic object: it can expand or contract like a balloon, depending on the pressure of the solar wind which is a thin wind of protons and electrons that gusts past earth. Ulysses discovered the magnetosphere had expanded to twice the size observed by earlier probes.

Ground-based infrared observations of Io and the Ulysses' observations revealed that volcanic activity on Io is responsible for the highly-ionised magnetosphere. About a ton of material from the volcanically active moon finds its way into the magnetosphere every second, becomes ionised and then is accelerated to high energies.

Ions and electrons from Jupiter's ionosphere and the solar wind are also present and transported throughout the Jovian magnetosphere. Some of these particles too, are accelerated to extremely high energies to form intense radiation belts. Radio signals from Ulysses showed the Io plasma torus was patchier than expected.

Ulysses' dust detector confirmed that Jupiter is relatively dust free compared to the other outer planets. Its intense charged particle environment is very effective in removing any particulate matter that may escape from Io. One of the novel features of the Ulysses-Jupiter encounter is that the spacecraft on the outbound leg of the journey traversed the outer magnetosphere on the dusk side, a region for which scant information existed previously.

Leaving Jupiter, Ulysses now heads for its main business -- the exploration of the poles of the sun. There, starting June 1994, Ulysses will peer toward the sun to gain new insight into what drives its hot, thin "wind" of charged particles; what triggers the flares that periodically erupt near its equator; and, what generates the magnetic fields that shape every solar "breeze". Besides searching for clues to the working of the sun, and by extension, other stars -- Ulysses will turn its attention outward, seeking what may be the first sample of pristine cosmic rays from elsewhere in the galaxy.