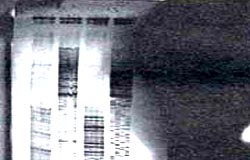 J. Craig Venter, till now just another scientist who once worked with Washington's National Institute of Health and whose only claim to fame, or rather notoriety was his much-publicised row with the Institute authorities which refused to grant funds for his project on human genome sciences, has finally hit the jackpot. He has deciphered the entire DNA sequence of a free-living organism. The sequence is a chain of 1,830, 121 DNA bases, the chemical units of the genetic code, which constitute the entire genetic data base of the bacterium known as Hemophilus influenzae. "This is an incredible moment in history," raved Dr Fredrick R Blattner of the University of Wisconsin, "This is what geneticists have been dreaming for a long time."

Every human cell, contains DNA, which is the chemical basis of life. 97 per cent of which is regarded as "junk", while 3% of it is worthwhile, which comprises, 60, 000-80, 000 genes. These genes are the blue print and hold the essence of life. When decoded they will reveal tales of life and death, sickness and health. In other words, our future will be unfolded before us.

Venter began his work when he discovered a paper by a geneticist, Leroy E. Hood in which DNA is sequenced by robots, instead of it being done manually. He obtained one of the first sequencing machines from Applied Biosystems Inc. to further accelerate the process.

Every living cell contains two nucleic acids-DNA (deoxyribonucleic acid) and RNA (ribonucleic acid). DNA is present in the nucleus, while RNA is present outside it, in the cytoplasm. RNA, is widely distributed and exists in three forms- messenger RNA (which carries messages between the DNA to the site of protein synthesis), t-RNA or transfer RNA ( which identifies the required amino acid and carries it to the protein assembly line) and r-RNA or ribosomal RNA ( is the RNA present in ribosomes-- site of protein synthesis.)

Each DNA has a corresponding RNA. The DNA code is read and the message is carried to the site of protein synthesis via the m-RNA. The t-RNA then identifies the required amino acid and carries it to the protein assembly line. This process continues till the complete protein is synthesized.

Venter observed that the cells know exactly which part of DNA comprises genes. So he copied the genes into messenger-RNA (mRNA). Venter took the mRNA and then made a DNA copy -cDNA (complement to the m-RNA) and so, only the genes were simulated not the junk. Venter produced thousands of such cDNA pieces and then deciphered them by reading them on the machine. He could read them at rapid-fire speed as he developed special software programmes to fit together the "enormous jigsaw puzzle".

Until now geneticists discovered genes by seeing what function is impaired when a mutation, or change of bases, is made in a bacterium's DNA. With the full catalogue of genes in hand they can start with a gene and search for its function. Soon they will be able to tell, by examining an individual's genes, whether he or she is likely to develop a heart disease or be struck by breast cancer at any point of time in his or her life.

"The impact of this genetic information...... may be the mainstay of drug companies in the future," says Jerry Slinghtom, a scientist working in the R&D wing of the frontrunning US biotech firm Upjohn Co. And the pharmaceutical companies realised this much before Venter had proved his true worth and the scientist community was still scoffing at his seemingly unrealistic Human Genome Project. A handful of them, led by none other than the drug giant SmithKline Beecham, became firm Venter-believers when the scientist walked out of the Institute in a huff when his proposed project failed to acquire grants. The scientists disapproved of his "short-cut approach". But Venter wanted to move fast and he found a kindred soul in his colleague William A.Haseltine.

Together they formed an alliance. Venter heads the non-profit Institute for Genomic Research (TIGR) in Gaithersburg, Md., while Haseltine is the CEO of the Human Genome Sciences Inc.(HGS) in Rockville,Md., which has the right to commercialize TIGR's findings. The two "Gene Kings" were ardently courted by the drug companies. SmithKline Beecham , Hoffmann-La Roche Inc , Upjohn and Pfizer Inc and Merck & Co invested mega bucks in a bid to cash in on what they were convinced was a big bonanza. And their instincts, as it has now turned out, were correct.