Creating a family tree for rice 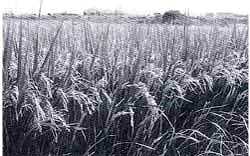 A GROUP of 20 scientists at the National Chemical Laboratory (NCL) in Pune has developed biotechnological tools to study the genetic diversity of rice. Says team leader P K Ranjekar, "We are interested in studying crops of special relevance to India, and so chose to work primarily on rice."

In a paper published in the July 1993 issue of the Journal of Plant Biochemistry and Biotechnology, the scientists report they can determine the genetic relatedness of different rice species using a tool known as "restriction fragment length polymorphisms". The scientists have developed a genetic probe -- a fragment of rice DNA -- that combines with certain portions of the rice genome to produce a characteristic pattern for a given variety of rice. The greater the similarity of the patterns of the two different cultivars, the more closely related they will be, says Ranjekar.

This information, he says, will be useful to breeders who are trying to choose genetically different parents in their rice-breeding programmes.

Under the auspices of the National Network in Rice Biotechnology, NCL scientists are trying to develop genetic tags that will enable them to quickly identify whether the gene for resistance to bacterial leaf blight -- a virulent bacterium that causes heavy crop losses -- has been incorporated into the new variety.

NCL scientists are also in the process of putting together a genome library of a basmati rice variety. Explains Ranjekar, "It is important that we develop our own library of indica rice varieties, especially as most scientists abroad are working on japonica varieties, which are easier to transform."

The scientists have also isolated the genes responsible for coding two proteins -- glutelin and prolamin, which comprise 80 per cent and 5 per cent of the seed protein respectively. The scientists say there is a possibility of modifying the glutelin gene and genetically engineering rice to produce more nutritious varieties.