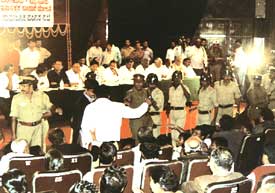 the draft environmental impact assessment (eia) notification has been available for comment on the Union ministry of environment and forests (moef) website for almost a year now. Consequently, moef has gone ahead with amending the draft based mostly on consultations with government departments and apex industry associations, such as the Confederation of Indian Industry. ngos and people's organisations have been conveniently left out of the loop. Even the Parliamentary Standing Committee on Science and Technology, Environment and Forests has been overlooked.

"We were not consulted for the notification. We came to know of it recently and wrote to the ministry for an update,' says committee chairperson P G Narayanan. In a letter to the committee, moef stated that the "comments of the Apex Industry Associations and central ministries have been examined and necessary amendments have been made'. On July 6, moef secretary Prodipto Ghosh presented the revised draft to the prime minister's office. It has now been sent to the Union ministry of law for final approval.

Meanwhile, ngos led by the Campaign for Environmental Justice-India (ceji) have been protesting against the undemocratic process adopted by moef in drafting the notification. ceji did receive a promise from A Raja, Union minister of environment and forests, of wider consultations with people's organisations, regional and local governments. "But they are yet to happen,' says Leo Saldanha of ceji.

Suited to industry The draft notification was drawn up to strengthen existing regulations. For instance, currently, the terms of reference for eia are laid down by the project proponents or the consultant hired to execute the eia. But the draft proposes setting up of an expert appraisal committee to determine the terms for addressing environmental concerns. If needed, the committee can also hold a public consultation and confer with other experts. The terms will then be put up on moef's website. Also, minutes of other committee meetings and summaries of draft eia reports will have to be made available on the website.

However, activists feel that the draft, which draws on recommendations of the Govindarajan Committee on Investment Reforms, is better suited to industry needs than to the environment or the project-affected.

One of the most controversial clauses of the draft is on public hearing norms. It stipulates that the district authorities can cancel a public hearing if they feel the situation may get out of hand. "This kind of discretionary power in holding public hearings is prone to misuse. No investor is interested in a public hearing. Also, landfills, including hazardous ones, are exempt from public hearings.