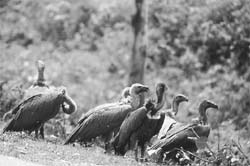 vultures are gregarious scavengers. They sit in large sized groups, hunched, looking for carrion. But soon there might not be enough of them surviving to perch in groups. High mortality rates have been recorded among several species of the vulture found in the country. A new study reveals that a possible reason for their diminishing numbers maybe an infectious disease which initially causes a drooping of the affected bird's head.

A seminar, organised recently by the Bombay Natural History Society ( bnhs ), saw experts gather to draw an emergency action plan to save the vultures. And a state of emergency does exist. Statistics presented in an article of N ew Scientist issue dated August 5, 2000 show the population of the white-rumped vultures ( Gyps bengalensis ) in the Keoladeo national park, in Rajasthan, reduce from 1,800 in 1986 to 86 in 1999. No white-rumped vulture has been recorded at the national park this year. Studies show that the vulture population in India has declined by 90-95 per cent. "In a number of places including protected areas, like Corbett and Gir, there has been a complete wipe out,' says Vibhu Prakash, an expert on vultures working for bnhs.

There are eight species of vultures in India. The worst affected are the white-backed and the long-billed ( Gyps indicus ) vultures. Populations of the Himalayan Griffon ( Gyps himalayensis ), the king vulture (Sarcogypus calvus) the Cinerious vulture ( Aegypius monachus ) and the Egyptian vulture ( Neophron pernopterus ) are also declining. And the decline is not limited to India.
The droop in figures Initially scientists had assumed that the deaths were occurring to pollution and toxic substances as in the case of the bald eagle in the us . But, experts are now suspicious of an infectious disease factor, which causes the Head Drooping Syndrome ( hds ), to be responsible for the drastic decline in the vulture population.

News of the possible presence of an infectious disease factor in vultures has been coming through for sometime now. But this was the first time that pathologists, virologists and toxicologists, all came together to discuss the problem on a common platform. hds was first observed by Vibhu Prakash, when he recorded a large number of dead vultures suspended from tree branches and perches and falling down from their roosts.

A hds afflicted bird sits with its neck hanging limp between its shoulders. It shows no outward sign of sickness in the initial days. However, it becomes lethargic in course of time and dies within about a month. Asad Rehmani, director of bnhs, says they are almost sure hds is caused by some infectious disease. "The drooping might be related to a disease or be a marker of a disease,' says Atanu Basu, officer in charge of the division of electron microscopy at the National Institute of Virology in Pune.

According to Virani the infectious disease factor is believed to have originated in Southeast Asia and travelled west to India. He explains, "The contiguity of the vulture population and their foraging habits can help spread any such disease and if not checked, the disease could affect vultures in the southern parts of Africa as well.'

"The appearance of what appear to be identical symptoms in vultures from three different areas of India strengthen the assumption that the widespread population decline has a common cause,' says Robert Riseborough of the us Fish and Wildlife Service.

Andrew Cunninghum of the London Zoological Society, who was involved in the pathological tests conducted on vultures says, "The large-scale deaths might be a result of a slow-acting toxin or a disease factor.' He informs of tests revealing bacteriological evidence, implying the existence of an infection. Tests have revealed the presence of a virus called the adinovirus. According to scientists at Poultry Diagnostics and Research Centre ( pdrc), adinovirus is a type of dna virus, found on animals and human beings as well. During experiments, tissues of dead vultures were injected into specific pathogen free chicken embryos, rich with antibodies and used to test different infections. The embryos died, proving that there was a viral infection in the dead vultures. However, the scientists are yet to reach at a conclusive stage of research.

Persisting Doubts
There are conflicting opinions among the scientist themsleves. S M Satheesan, a scientist in World Wide Fund for Nature ( wwf) , India, claims that poisoning is one of the major causes of vulture deaths in the country. "People poison carcasses of cattle to kill wild animals that prey upon their cattle. Vultures are affected after they feed on these carcasses,' says he. He also suggests that human factors are by far the greatest contributors in the decline of the vulture population in the country.

Pesticides can have a tremendous impact on bird population. Pesticides like DDT, Dieldrin and Eldrin are used extensively in India. Lethal quantities of these substances have been found in other bird species upon examination. Pesticides are highly bio-accumulative and can make eggshells thin, leading to the death of the embryo. This leads to extensive breeding failures among raptors like vultures, which are slow breeders. Other causes like deaths due to poisoning, lack of food, annihilation by human beings have also been considered and evidences gathered on these suggest that these factors are adding to the problem. However, Riseborough says, "Poisoning and other theories do not explain the large number of deaths that have taken place. Pattern of pesticide effects are not evident on the birds. Moreover, the scale of poisoning is not widespread as to explain the catastrophic decline.'

Tests revealing the presence of adinovirus corroborate the hds theory. "However,' says Basu, "this is not a new finding. There are other viruses as well. Although it is an interesting finding, we cannot say for sure that the adinovirus is responsible for the death of vultures.' Further tests are being done and it might take some time to crack the mystery. Prakash explains that not much is yet known about different diseases the vulture maybe susceptible to.

Saving the scavenger
Problems abound in trying to solve this mystery. There are few experts and fewer places to conduct research exist. pdrc and National Institute of Virology, both in Pune, are the only institutes with the requisit facilities. India does not permit the export of biological samples from the country. The vultures, therefore, cannot be researched upon abroad. When quized about these rules, S C Sharma, the Additional Inspector General (Wildlife) in the ministry of environment and forests, said, "Government has to develop expertise so that samples don't go outside.' One is left to wonder whether the vulture will be still be around when such expertise has been developed.

Harsh Vardhan, honorary secretary general of the Tourism and Wildlife Society of India of Rajasthan laments government's apathy. He says, "The government is largely to blame for the sad state of affairs. Authorities took no responsibility and let the problem deteriorate. I can give examples of officials who did not report death of vultures simply because it meant additional work for them.'

There has not been any news of the government undertaking any kind of project to assess the situation or undertake measures to protect the fast disappearing species of vultures in India. Wildlife bodies are now turning towards organisations like wwf to help save the vultures as years of plea to the government on the subject have gone unheeded.