The fight to save Moenjodaro 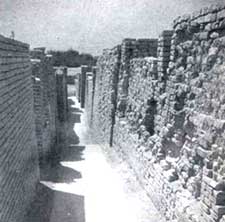 A concerted international effort is underway to protect the remains of the ancient city of Moenjodaro from the double menace of a rising water table that is turning the city to dust and the unpredictable ways of the Indus which threatens to flood the site. But the plan may be too little or to late to save the city which has survived, in remarkable condition, its burial for 5,000 years.

R M Shamsi, project director of the authority for the Preservation of Moenjodaro (APM), currently has a budget of Pak Rs 297 million to implement the two major projects of a masterplan to save the city: to lower the water table and to protect it against floods and other river action. Half of the funds are provided by the Pakistan government, the rest by UNESCO.

When the city was excavated in 1922, it was found well preserved. But decay quickly set in and was particularly noticeable after the construction in 1933 of the massive engineering works of the Sukkur Barrage, some 125 km north of the ancient city, and the Dadu canal, which is only 4 km to the west.

Designed to provide controlled year-round irrigation to a large area of Sind province, these works raised the depth of the surface water table which was nearly 8 metres from the surface in 1922 to a mere 1.52-3.66 metres. The high water table and the climatic conditions of the region combine to produce a continuous cycle of saturation, evaporation and crystallisation of salts that are sucked through the brickwork, resulting in severe weathering and disintegration. Destruction of bricks is the primary danger to Moenjodaro. This occurs mainly through the action of sodium sulphate, which is drawn into the bricks by capillary action.

The engineering works to drain out the water in the masterplan are impressive. A network of 27 tubewells, each with a capacity of 0.16 cumecs (cubic metres per second) and driven by 60 horsepower motors, pump out the groundwater round-the-clock from a depth of 33 metres.

The water goes into a 5-km circular drain around the periphery of the site. From here it goes into a disposal channel over 2 km long to be lifted into the Dadu canal by the 10 powerful engines of the pumping station. In the canal, the groundwater mixes with the outflow from the Sukkur Barrage to make its way to the irrigated wheat and sugarcane fields of the Sind farmers.

The efforts seem to be paying off for, in March this year, the water table had gone down to 8.5 metres. Muhammed Qureshi, Deputy Project Director of the APM, however, cautions that it will rise by several metres in the flood season.

On the river bank, stand two lines of protection bunds, 15 metres high, ready to hold back the flood waters, and five massive T-shaped spurs jut into the river channel, designed to dissipate the flow of the flood and to divert the erosion of the river to the opposite bank.

That the unpredictable behaviour of the river is a very real threat is borne out by the remains themselves. Amongst the varied and sometimes conflicting theories as to how and why the Moenjodaro civilisation collapsed, many archaeologists believe flooding was the cause. A British archaeologist wrote in 1968 that "what is not conjectural is the intermittent impact of deep and prolonged flooding.... Through the centuries the citizens were called upon to battle time and again with arduous circumstances.... It is easy to imagine the accumulative demoralisation of the citizens and the gradual worsening of civic standards." But only time will tell if the custodians of one of the cradles of civilisation will withstand this salty test of modern civilisation.