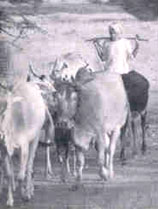 While livelihoodstock can safely be regarded as An economic asset, an excessive number Of its spell trouble for foodgrain pro- diction An increasing trend to use the oil land for fodder production for pestack is cited to be the reason. Wing to Lester Brown and H Kane C Waslungton based Worldwatch one. grairiland in India has fallen per cent from a peak of 107 million 11%3. If this trend continues, it is wood that in 2030 At), India will In isuport 45 million tonnes of pains tinnually. The immediate need therefore, is to identify research requirments into feed resources for Cattles specially for small and landless Farmers.

Animal production can make an Important contribution to human Development," specifics the United Nations Development Programme (UNDP) Human Development Report 1994. This is relevant since rural people in developing countries tend to invest in livestock whenever they get access to credit. According to a project sponsored by the International Fund for Agricultural Development (IFAD), 44 per cent of the total loan amount disbursed to landless people in Bangladesh, India and Vietnam was invested in livestock.

LeL to market forces, this increased demand will mean more irrigated land to be set aside for fodder and feed production. In milk producing states, such as Punjab, Gujarat and Haryana, 7 to 10 per cent of total cropped area is being used for sowing fodder. This could affect cereal grain production in the coming years considerably.

"Investments in livestock are inadequately supported by research in areas such as animal management and feed resources for them," states Frands Dolberg of the University of Aarhus, Denmark. In his recent report to IFAD on research requirements in feed resources for small and landless farmers in Bangladesh, India and Vietnam, Dolberg adds that the research conducted on fibrous crop residues and other aspects of ruminant nutrition is incomplete. This finding is significant in view of the limited availability of feed resources. An increase in digestibility of crop residues by 10 per cent could have a revolutionary influence on animal productivity (Down to Earth, Vol 4, No 4).

The digestibility of straw and stovers (straw from maize, sorghum and millet) by animals is usually low, about 40 to 50 per cent. This is due to the presence of indigestible lignin in it, which results in cattle eating 30 to 50 per cent more. The lignin prevents bacteria in the stomach from penetrating the straw. Various methods - chemical treatment with alkali, ammonia and urea, oxidative methods using hydrogen peroxide in alkaline solution, biological methods using white rot fungi, arid enzymatic action using a mixture of enzymes like xylanases and cellulases - are being used to increase the digestibility of straw to 90 per cent.

While most of the research has focussed on feed resources for large ruminants, feed requirements of small ruminants like pigs and poultry has been neglected in India, points out the report. In Bangladesh, useful on-farm poultry research is being conducted, and it has a smallholder poultry model exclusively targetting women. India and Vietnam, however, lack such training and extension projects that could benefit rural women. Interesting research is being carried out in Vietnam on pigs and to some extent on ducks. The objective is to identify sustainable, alternative feed resources to cereal based feeding systems. Meanwhile, farmers in niountain regions have already taken to feed- ing sugarcane juice to pigs in an effort to provide liquid energy diet to animals. This would allow fibrous tree leaves to be used as protein supplements.

Though each of the three countries surveyed have unique experiences, the report recommends that technical institutions must establish close links between research on farmer practices, on-farm trials and farmer participation to ensure sustained feed to livestock, and above all to humans.