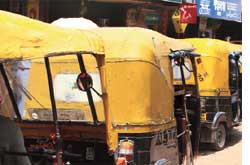 Will Kolkata succeed in phasing out two-stroke autos by July end?

two-stroke and non-lpg (liquefied petroleum gas) four-stroke autorickshaw will not be allowed to ply in Kolkata from August 1, the Calcutta High Court has ordered. The city has around 38,000 registered two-stroke autorickshaws running on petrol; 30,000 of them are illegal. With six weeks left for the deadline, 20,000 applications were in for replacing two-stroke engines with lpg four-stroke, and 1,600 were replaced, said Sovandeb Chattopadhyay, leader of the Auto Bachao Committee in Kolkata.