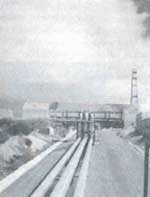 GEOTHERMAL power is fast emerging as a significant source for electricity in several island nations, mainly in the Indian Ocean and the Pacific regions (The Royal Geographical Society Magazine, Vol 68, No 3).

For instance, Indonesia is setting up 2 geothermal power plants each of 55 mw capacity on the island of Java, at a total cost of us $120 million. By 1997, a further 220 mw capacity will be added. Geothermal energy accounts for 8 per cent of New Zealand's installed power capacity and in Iceland, it provides heating and hot water for more than 85 per cent of the houses. France and Germany, too, have used geothermal energy for domestic heating.

Geothermal plants use naturally heated steam drawn to the surface through a series ofboreholes about 1 km in length. The geothermal discharge cannot be used directly in the turbines, as 80 per cent of its water content must be first removed. Otherwise droplets speeding at over 200 kin an hour would hit the turbine blades like bullets.

The greenhouse gas emissions of geothermal stations are much less than of coal burning power stations: for each kilowatt-hour of electricity produced, the Ohaaki field in New Zealand releases 320 gm of carbon dioxide compared with 960 gm if coal was used.

But geothermal energy can be depleted unless existing fields are carefully managed. Withdrawal of steam from the aquifer can reduce the reservoir temperature and pressure, which means much less steam for power generation. The life of geothermal field can be prolonged by reinjecting water on the periphery of the steam field.