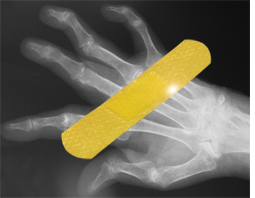 there is renewed interest in gold salts curing rheumatoid arthritis, a chronic inflammatory disease of joints and other tissues. Using them to treat arthritis has been a matter of longstanding debate because of their side effects.

A new study by David Pisetsky, chief of rheumatology and immunology at the Duke University Medical Centre, Durham, North Carolina, provides fresh insight into the treatment mechanism. "We shouldn't dismiss gold salts. We have really never understood why gold works. Now that we have a better handle on its action (through the study), we may be able to use the mechanism to create new and better drugs to treat arthritis,' says Pisetsky.

The use of gold salts has been recorded in international medicinal practices since the early 20th century. High cost and side effects on kidney and liver acted as deterrents and their use was discontinued. Gold has also been used in ayurvedain the form of powder for long in India. Though ayurvedic establishments claim their method is effective, it is restricted to India.

New medicines like methotrexate and other drugs then started being used as alternatives. "Gold salts are used only when a patient does not respond to new medicines. It is also used as an anti-rheumatic medication during pregnancies,' says P D Rath, rheumatologist, Max Hospital, Delhi. But with Pisetsky's study in place, scientists hope gold salts might be brought back to regular treatment again. M M Rao, assistant director, Central Council for Research in Ayurveda and Siddha, Delhi, says the study will give back "gold its lost sheen'. The study will be published in theJournal of Leukocyte Biology in January.