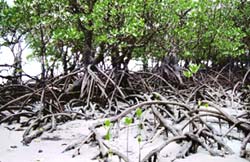 a new research study shows that the function of mangroves is not limited to protecting the coastline and maintaining biodiversity. An international study has found that though mangroves cover less than 0.1 per cent of the global land area, they provide more than 10 per cent of essential dissolved organic carbon (doc) that is supplied to the oceans from land.

We wanted to find out more about doc since it is an important player in the global carbon cycle that regulates atmospheric carbon dioxide and climate, says Thorsten Dittmar, the lead author from Florida State University in the us. The findings appeared in Global Biogeochemical Cycles (Vol 20, No GB1012, February 21, 2006).

The scientists found that the mangrove root system traps carbon-rich leaf litter and allows it to settle into shallow sediment. Tidal action then flushes the dissolved carbon into the open ocean.

The authors analysed water samples from the massive mangrove forest in northern Brazil, using natural carbon isotopes and nuclear magnetic resonance spectroscopy. They found that the mangroves export about 25 billion kg of carbon to oceans per year, nearly triple the amount estimated from previous smaller-scale studies.

The findings are crucial as mangrove foliage has declined by nearly half because of increasing coastal development and damage to its habitat. As the habitat has changed, ever-smaller quantities of mangrove-derived detritus are available for formation of doc . The researchers speculate that the rapid decrease in mangrove extent may eventually shut off an important link between the land and oceans, impacting atmospheric composition and climate.