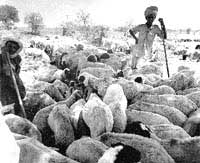 THE relatively new field of ethnoveterinary medicine, which is establishing itself as a serious discipline, has far-reaching implications for the well-being of livestock in the developing world. Ethnoveterinary medicine is the knowledge possessed by non-literate cultures with regard to animal health and disease that is passed on in the form of an oral tradition down the generations. The fact that it is orally transmitted distinguishes it from other non-western traditions of medicine like ayurveda and acupuncture. The rationale behind ethnoveterinary research is finding cost-efficient and ecologically sound alternatives to industrially produced veterinary medicines and to reduce the dependence of developing countries on imported preparations. Communities like the Raika, belonging to a camel-breeding caste living in Rajasthan and Gujarat, have practically no contact with government veterinarians. But their rich knowledge on the subject has helped them prevent and treat many, even if not all the diseases afflicting their animals.

Since camels and sheep are normally kept by nomads like the Raika who are constantly on the move, information about such diseases rests mostly with the owners themselves. Pastoralists usually have extensive knowledge about the pharmacological effects of local plants too. Frequently, animal-based cultures also develop their own vaccination techniques against diseases including brucellosis, and foot and mouth disease. Traditional surgical techniques have been quite successful, particularly in the case of fractures.

Although Modaram Raika is a farmer and pastoralist, he is much in demand for treating animals. Most mornings finds two to three people at his doorstep, waiting for his life-giving tips. One of Modaram's recipes - a mixture of roasted and ground wheat and tilli (sesame) flowers - helped a fellow Raika's buffalo successfully deliver her calf.

A popular technique among the Raika and many other pastoral communities worldwide is burning the animal with a red hot iron. The method is scorned by orthodox veterinarians as being painful and pointless, whose efficacy deserves examination. However, the Lokhit Pashu-Palak Sansthan - a non-governmental organisation working in this field in Rajasthan - has witnessed cases in which animals that had previously been treated unsuccessfully by veterinarians were cured by this treatment. A technique that demands great skill and experience, the number of burn marks reads like a patient file, revealing the animal's medical history.

But traditional veterinary knowledge is not entirely infallible, vulnerable as it is to adulteration. Hanwant Singh, the director of the Pashu-Palak Sansthan cites the example of the use of the antibiotic tetracycline (or what the locals call "terramycin'), extremely popular among sheep breeders. "The drug is often misused. It is administered to animals that are weak or worm-infested. The locals also call it terah massi because the drug is supposed to help against 13 different diseases.' "Similarly, a locally-made preparation called Karji ka tel (oil from the Karji tree) is effective against mange in camels and we promote its use. But many have switched to plant pesticides, such as malathion and bhc (benzine hexachloride) and use these on their animals. These preparations are toxic and have environmental side-effects, but are quite cheap. Being illiterate, the Raika are unable to read the labels which in any case are often in English.'

However, the Raika often consult vaids (traditional physicians) when their animals are ill. Some vaids treat both humans and animals, while others specialise in for instance, fractures or obstetrics. Often they do not even charge for their services, although they may be compensated in kind. While vaids usually make their medicines themselves from plants that grow in the vicinity of the settlement and substances that are easily available even in the smallest village, like jaggery, alum, rock salt and turmeric, many do not shy away from using commercially-prepared prescriptions if the need arises. And if the physician cannot help, the owner approaches a traditional healer or bhopa (a person who mediates between humans and spirits), for help. Most villages have a healer.

But it is rather unlikely that a Raika would consult government vets or private practitioners. The reasons for such avoidance are the lack of trust and difference in social status between the owner of the animal and the academically qualified veterinarian. The traditional healer has the advantage of sharing the same social background, terminology and value system with the owner of the animal.

The current scenario
Among the pioneers of ethnoveterinary medicine include the American anthropologist Constance McCorkle. McCorkle defines the subject as "The holistic interdisciplinary study of local knowledge and its associated skills, beliefs, practitioners and social structures pertaining to the health care and healthful husbandry of food-, work-, and other income-producing animals; always with an eye to practical development applications within livestock production and livelihood systems; and with the ultimate goal of increasing human well-being via increased benefits form stock-raising.'

The field has received greater recognition due to the cooperative efforts of an interdisciplinary team comprising of McCorkle and Evelyn Mathias, a German veterinarian. The duo published an interdisciplinary bibliography on the subject in 1989 and more recently, have edited an anthology which gives a comprehensive overview of the current status of research on several continents.

In general, however, veterinarians have been extremely slow in taking an interest in the subject which is still shunned by conventional veterinarians and institutions of higher learning. In fact, until 1975, there had been no systematic investigation on the subject. Data was largely anecdotal and scattered in anthropological and travel literature. Developmental agencies have of late been taking an interest in the subject. The Food and Agriculture Organization has sponsored the documentation of the ethnoveterinary knowledge systems of seven Asian countries, including India. In Nepal, around 140 species of plants being used in indigenous animal treatments have been documented. In Thailand and Nigeria, the number of such plants is reportedly 150 and 92 respectively. The preparation of a practical kit entitled "Ethnoveterinary Medicine in Asia' by the International Institute of Rural Reconstruction in the Philippines was partially financed by the World Bank. The first