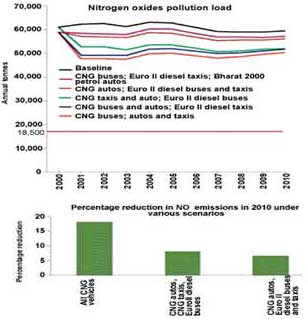  When all buses, autos and taxis which ply in Delhi move to cng by 2001, the total pollution load of nitrogen oxides (NOx) from vehicles will reduce by about 18 per cent against the target of 68 per cent by 2010.
 NOx pollution levels will be still so high in 2010 because trucks, cars and scooters are least likely to switch over to alternative fuels.
 Because cng gives immediate reductions in NOx pollution as much as 2.65 years of NOx pollution will be avoided at the level estimated in 2000.
When SC order is not followed in full
 If Euro II diesel buses are allowed while all autos and taxis are moved to cng, the NOx pollution will come down by only 8 per cent as against 18 per cent when all buses move to CNG.
 If both Euro ii diesel buses and Euro ii diesel taxis are allowed even as all autos move over to cng, the NOx pollution will only come down by 6.5 per cent.
 Only 0.66 per cent than a year's load will be avoided at the level estimated for 2000.