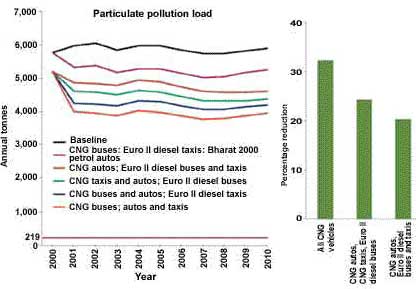 The cse study shows that the cng strategy will help to get closest to the clean air target compared to slow changes in diesel technology.
 When buses, autos and taxis move to cng by 2001, the total particulate emissions load from vehicles will reduce by about 32 per cent of the current emissions against the required 95 per cent.
There will still be such high particulate emissions because in 2010 the biggest emitters of particulate pollution will be trucks, cars and two wheelers that are least likely to move to cng.
 As cng gives immediate reductions in particulate pollution 5.3 years of particulate emission could be avoided at the level estimated for the year 2000. This translates to saving around 50,000 additional lives over these ten years.
When SC order is not followed in full
 If following the demand of the industry, Euro ii diesel buses are allowed even as all autos and taxis are moved to cng, then particulate pollution will reduce by only 24 per cent by 2010 as against 32 per cent if all buses move to cng.
Pollution avoided would be equivalent to about 3.9 years of the pollution load at the level estimated for 2000.
 Worse, if Euro II diesel taxis are also allowed even as all autos move over to cng, the particulate pollution will come down only by 20 per cent.
The pollution avoided would be equivalent to about 3.34 years of the pollution load in 2000.