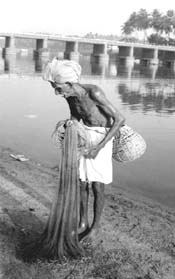 the Bharathapuzha, also known as the Nila in Kerala, is just another river that is gradually dying out. Originating in the Annamalai hills of the Western Ghats, it is the life-line for almost one-eighth of Kerala's population. However, according to a study conducted by the Zoology department of N S S College, Ottappalam, the entire river system is being destroyed and life forms dependent on it are under threat by increased human activity. It has also resulted in an acute water scarcity in the basin, particularly during the summer months.

The study reveals that around 70 species of freshwater fishes, 13 species of prawns, 10 species of crabs, two of turtles and innumerable molluscs are native to the river. Further, over 120 species of birds reside in the river basin, including many migratory species such as flamingoes, white-necked stork, open-bill stork, terns and gulls.

One of the activities at the root of problem lies is the sand mining. The fine sand of the river is in great demand and commands a high price. The mining activity is particularly bad in the stretch between Pattambi and Kuttippuram, where illegal quarrying operations exist simultaneously.

The main culprits are the 18 stations ( kadavus ) in Ottappalam which are licenced to carry out sand quarrying and the numerous private kadavus owned by influential persons. Even small-scale quarrying has contributed to extensive damage of the river.

The removal of sand has put an end to the percolation of water from the river bed to recharge the ground water in the area. "The villages along the river basin now face the severe problem of drinking water shortage because of the lowering of the water table and many pump houses along the river basin are now deserted,' says T N N Bhattathiripad, who has been instrumental in constructing a series of check-dams and sub-surface dams across the river.

Dr Shankar of Kerala Forest Research Institute says that "the extensive removal of sand has resulted in the exposure of rocks and the entire river bed is now overgrown with wild grass. The breeding pattern of aquatic organisms has been disturbed and even benthic organisms have been affected. This will upset the food chain and nutrient cycle in the ecosystem.'

Other activities like dynamiting of rocks, brick-making, lime-stone quarrying and pollutants from agricultural sources besides dumping of municipal wastes have also contributed to the destruction of the river.

What is needed at present is political will and a people's movement to restore and preserve this river system which has contributed immensely to the development of the state.